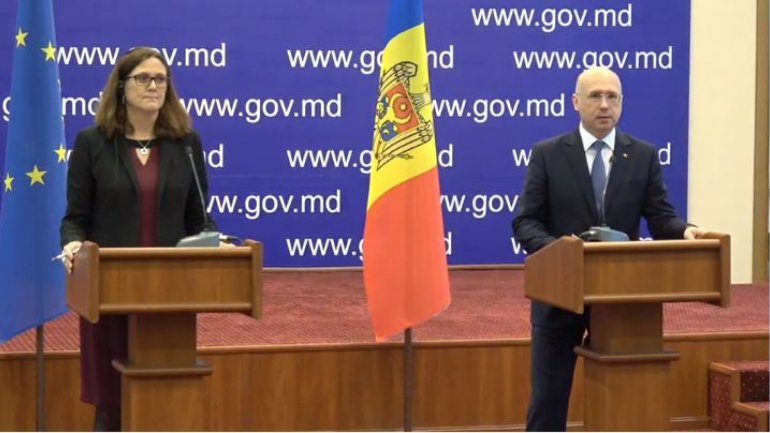 European Commissioner for Trade, Cecilia Malmstrom that is on a visit to Chisinau has declared that cooperation between Moldova and European Union will become even stronger. While benefits offered by DCFTA are proven by statistics.

During a press conference, along with Prime Minister Pavel Filip, Cecilia Malmstrom has declared that relations between EU and Moldova are growing stronger, while authorities from Chisinau must continue the reforms and bring to force new laws to fit European standards, to take maximum advantage from DFCTA agreement.

"The relations with EU are strong, while commercial relations are even stronger. EU is Moldova's main commercial partner. [...] There are many advantages that can already be seen. We have also discussed how they can be deepened even further. New laws and reforms must be implements in Moldova. We have spoken of food safety reforms so that eggs and meat exporters can have access to the European market. [...] I will launch an event to promote a new project of EU aiming to have stronger ties with entrepreneurs", European Commissioner for Trade, Cecilia Malmstrom declared.

In his turn, Prime Minister Pavel Filip has declared that the commissioner's visit has set in motions initiatives and programs that will make commerce with EU easier and continue to develop business environment and investments in Moldova.

"We discussed of a number of common achievements, particular in the of complex free trade agreement. The statistics are rather optimistic. Exports from Republic of Moldova to the EU market has reached 64% of the total amount. At the same time exports consists 50%. We must also mention the growing number of companies implicated in EU commerce and diversification of exported goods.

This growth, as well as the priority to support farmers from the country, has determined a growth in sales on EU market of such produce as plum, grapes and cherry, as well as modified the terms of exporting wheat, barley, corn and sugar. We have also spoken of issues that need to be solved to ensure Republic of Moldova's integrity on EU market and namely, the possibility to export animal products. For this to happen we still have ways to go" Prime Minister Pavel Filip said.

PUBLIKA reminds that according to the statistics, EU is the main commercial partner of Republic of Moldova.

In the first eight months of the year, Moldova's entrepreneurs have delivered to EU goods worth over one billion lei, or 64% of total exports.

This autumn marks three years since the implementation of the Free Trade Agreement.