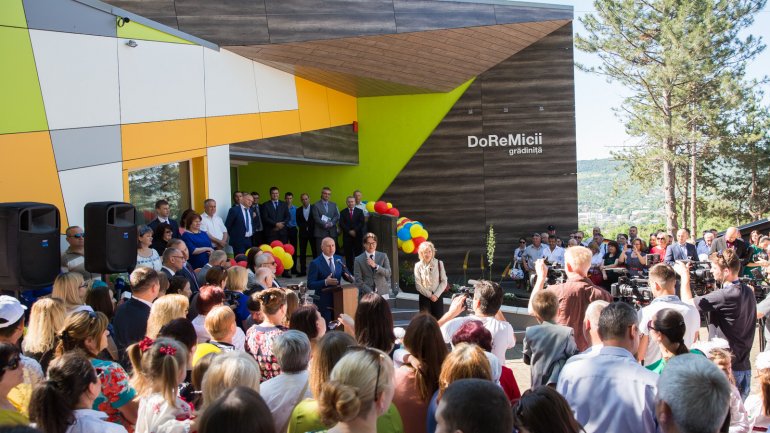 The kindergarten’s construction started in April 2016 and lasted a bit more than one year. Today, the pre-school institution widely opened its doors for children and parents. Honorary guests could not be absent from the event, as the carrying out of this project would have been impossible without them, the government’s communication and protocol department has reported.

“I have a feeling of content and professional satisfaction to see completed a project at the launch of which I personally participated. The today’s event shows us what means, in fact, the European integration of our country. There are concrete projects, meant to ensure the well-being of Moldova’s citizens” , Prime Minister Pavel Filip said at the event.

At the same time, the PM thanked the government of Germany for the support provided to implement the project. Filip stressed that this was not only a beneficial investment for residents of the Calarasi town, but also an example of observance of the European environment and energy efficiency norms. Thus, due to innovative technologies, solar panels set, geothermal heat pumps and the last generation PVC, the annual costs for maintaining the kindergarten will be by 90 per cent lower than of a similar building.

In the context, the prime minister highlighted the kindergarten’s accessibility to children with special education requirements. “This fact is a signal that we should learn from the tender age to be tolerant and respect each other” , Pavel Filip said.

Attending the event, Ambassador of Germany to Moldova Ulrike Knotz said that this project had been carried out within a program Social Infrastructure and Energy Efficiency. She expressed all openness for the further support of such social projects in Moldova. “In selecting projects, we will further rely on the most important criterion – direct benefit brought to citizens for improving the living standards,” the German diplomat noted.

The DoReMicii kindergarten from Calarasi town has an area of 1,100 square metres and will be attended by over 100 children, including with ages smaller than three year. The overall value of the project is one million euros, with the money provided by the KfW German Investment Bank.