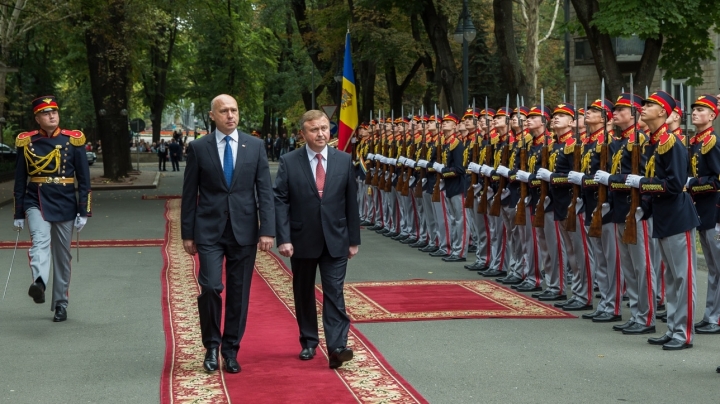 Prime Minister of Belarus Andrei Kobeacov started today his official visit to Moldova. Head of Government in Minsk had a bilateral meeting with Prime Minister of Moldova, Pavel Filip, followed by a discussion in the expanded delegations of Moldova and Belarus.

The sides discussed issues related to the entire Moldovan-Belarusian framework for cooperation in the political, economic, social and cultural.

Pavel Filip stressed the constructive and open dialogue between Moldova and Belarus, expressing his belief that there is great potential for bilateral relations. "The current visit is further proof of the good relations between our countries. Belarus is not only a partner of Moldova, but a true friend" , said Pavel Filip. The premier welcomed the organization of the XVII meeting of the joint intergovernmental commission for economic cooperation, which will be held Monday, October 3rd, 2016, in Chisinau. Pavel Filip said that this is a good platform for dialogue to identify optimal solutions to common problems and deciding on mutually beneficial.

In turn, Prime Minister of Belarus said that bilateral visits at the level of heads of state amounted to a qualitatively new level of cooperation relations and trust between Belarus and Moldova. "The friendly atmosphere of bilateral dialogue at all levels allows us to discuss and adopt constructive mutually beneficial decisions across the full spectrum of topics. The main line of discussion today is to find points of growth, economic cooperation" , said the Belarusian Premier.

Head of Government in Minsk also said that in this respect there are positive premises, stating that in seven months of this year, trade volume increased by 10-per-cent compared to last year, accounting for about 150 million dollars.

Particular attention has been paid to the possibilities of creating joint ventures and encourage mutual investments in various fields. Parties have launched proposals for cooperation in the fields of agri-food, pharmaceutical, seed production, but also in the wine sector.

Also, the interlocutors have referred to the importance of strengthening cultural relations. In this context, it was noted that the opening of Belarusian Culture Centre in Chisinau will contribute to unlocking the potential in this area.

Prime Minister of Belarus Andrei Kobeacov, has an official visit of two days in Moldova. The visit program includes meetings with the leadership of our country, attending the opening of Belarusian Culture Centre in Chisinau and demonstrations organized by the National Wine Day.

During the visit of Belarusian Prime Minister in Chisinau, Monday, October 3, 2016, the Economic Forum of Moldovan-Belarusian meeting joint intergovernmental commission for economic cooperation will be held, but also signing bilateral agreements after the prime ministers Pavel Filip and Andrew Kobeacov will support a joint press conference.