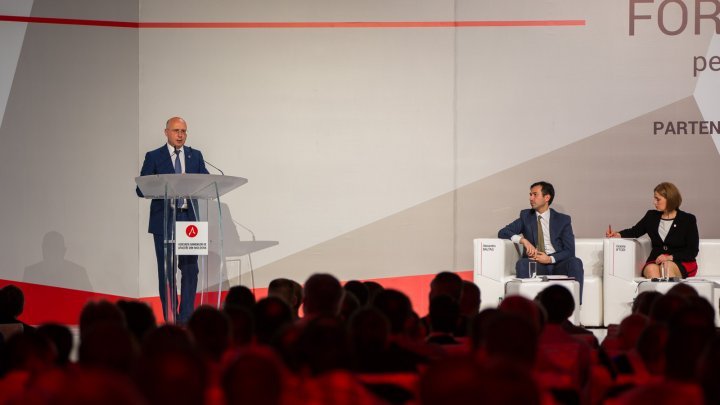 The Government's determination to increase the economy of the Republic of Moldova and create favorable conditions for the business environment was reiterated by Prime Minister Pavel Filip at the Economic Forum for Dialogue and Development, organized yesterday by the Moldovan Businessmen Association (AOAM).

The event was attended by more than 800 entrepreneurs from all regions of the country, as well as leaders of key institutions in the administration of the economic sector. The discussions focused on the measures taken so far and on the new state initiatives aimed at facilitating the business activity.

The Prime Minister reviewed the Government's most important actions to support entrepreneurs: reducing the number of permissive acts and the number of control bodies, strengthening the banking sector and subsidizing employers who create over 100 new jobs, creating virtual IT parks.

"We showed through concrete things that we are a pro-business government and we have achieved economic growth for two consecutive years," said Pavel Filip.

The prime minister said that the Government is continuing its efforts to diminish the shadow economy and attract investments in the country by promoting fiscal reform.

Thus, it is proposed to introduce the unique tax rate of 12% on the income of natural and legal persons and to reduce from 23% to 18% the contribution of the employer to the state social insurance budget.

Additionally, those who receive wages below the minimum subsistence level will no longer pay taxes, and employers in agriculture will pay social contributions of 12% instead of 16%.

"We want to reduce tax disadvantages to create new jobs. Thus, we will stimulate the payment of taxes and reduce the cash-in-hand phenomenon", said Premier Pavel Filip.

At the same time, a special tax regime for the hotel and restaurant business is to be established by reducing the VAT rate from 20% to 10%. Taxi drivers with a monthly salary of up to 10 thousand lei will pay a single income tax of 500 lei per month.

Measures to lower the pressure of organs with business control functions and limitation of pre-trial detention are also proposed.

"We do these things because we want you to feel better in the Republic of Moldova when you develop your business and, of course, because we want financial capacity to make social and public investments," emphasized Pavel Filip.

In the forum, entrepreneurs welcomed the pro-bussines legislative package to boost the development of the national economy and to contribute to raising the incomes of the population.

Also, businessmen presented their own visions of improving the business environment, based on their professional experience, and examined the opportunities to capitalize on the economic potential of our country.