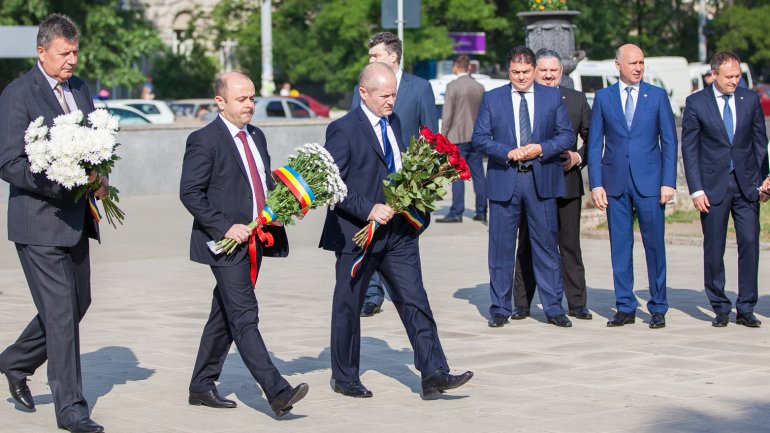 Prime Minister Pavel Filip and Parliament Speaker Andrian Candu have participated today, June13, in a ceremony of commemorating the victims of the first wave of Stalinist deportations of 1941. Along with the officials, members of government and premier’s cabinet laid flowers at “Trenul durerii” (Train of Pain) monument.

Read also: BLOODY PAGES OF A TRAGIC DESTINY. 76 years from first deportations to Siberia and Kazakhstan

Pavel Filip stated the quote saying that if you do not have the memory of history, you risk repeating it.

“Every family in Moldova has somebody who has been deported to Siberia or Kazakhstan. Therefore we have chosen as the direction of country’s development a vector that means other values, authentic democracy, freedom, fair competition. The European values we promote are very important, because they come to bring people freedom” , said Pavel Filip.

"It's a black memory in the history. Imagine, the thousands of persons who have suffered, if only at the first wave of deportation were sent over 1,300 train wagons" , said Andrian Candu.

"This is our struggle. Their ideology has brought only tragic faith upon us" , said Mihai Ghimpu.

Today we mark 76 years since the first wave of Stalinist deportations in Bessarabia.