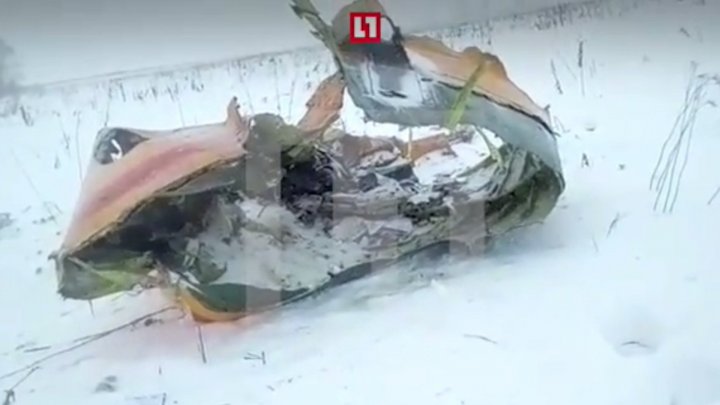 The Foreign Ministry in Chisinau contacted the Moldovan Embassy in order to find out if Moldovan citizens are among the victims.

Two bodies as well as a cockpit voice recorder and parts of the fuselage have been retrieved from the crash site of the Saratov Airlines An-148, Russia's Emergencies Ministry reported.

The area has been cordoned off by the police and the National Guard, the head of the local branch of the Emergencies Ministry, Sergey Poletykin, said on Sunday.

The search-and-rescue operation is ongoing. Special lighting has been set up so the operation can continue into the night, he added. Earlier, the ministry said the area will be observed by drones.

Meanwhile, the Transport Prosecutor’s office said everyone aboard the An-148 was dead. Earlier, the Emergencies Ministry released the names of all 71 people on board the ill-fated aircraft.

A passenger plane with 71 people aboard crashed Sunday outside Moscow, Russian officials said.

The cause of the crash was not immediately clear. None of the people aboard the Antonov An-148 jet were believed to have survived, the Interfax news agency quoted an emergency-service source as saying.

“I walked out of my house and heard the plane hit the ground,” a witness who was not identified said in an interview with REN TV. “There was a huge explosion.”

Witness footage from the scene broadcast on Russian television showed orange-painted pieces of the fuselage scattered across the snow.

“We have all kinds of scenarios” for what may have caused the crash, Russian Transportation Ministry official Zhanna Terekhova told Rossiya-24. “This could have been caused by anything, including human error or weather conditions.”

Almost all of the people on the plane were from the eastern part of the Orenburg region, according to the region’s governor’s office, Interfax said. Orenburg lies on the southern end of the Ural Mountains.

Russia’s most recent high-profile plane accident came in December 2016 when a military transport plane carrying dozens of members of the Red Army choir to Syria crashed into the Black Sea.

Russia has struggled with a poor airline safety record for years. From 2008 to 2017, 326 people died in accidents on Russian-scheduled commercial flights, according to the International Civil Aviation Organization. Sixty-one people died in the same period on U.S. flights.