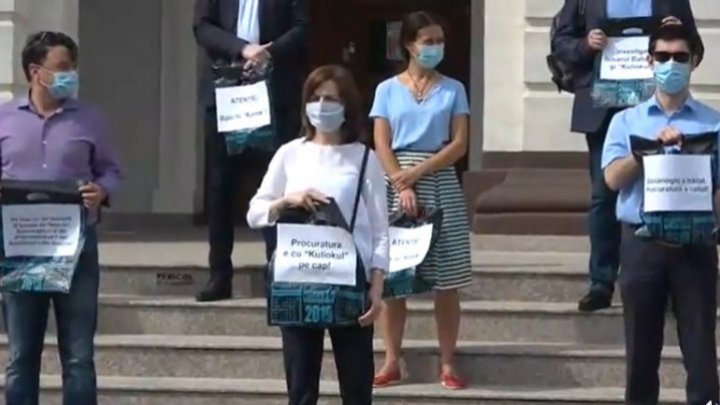 The members of the Action and Solidarity Party organized a flash mob in front of the General Prosecutor's Office, being dissatisfied with the decision not to start the investigation against President Igor Dodon, based on the videos showing he allegedly received a bag of money.

"It is a great mockery of the Prosecutor General against the people whose money has been stolen for years. We wonder why Stoianoglo applied for the position of general prosecutor but he did not intend to make order ", declared the PAS leader Maia Sandu.

Sandu said it was more than "the laziness of the prosecution". "I think there are political influences here and that upsets us a lot," the PAS leader said.

Former Justice Minister Olesea Stamate told the media that, according to the Code of Criminal Procedure, criminal prosecution begins when there is at least a reasonable suspicion that a crime has been committed, and from her point of view, there exists this reasonable suspicion.

MP Sergiu Litvinenco said that prosecutors did nothing to investigate this case, they just waited for the deadline and issued this ordinance. Moreover, Litvinenco accused the current prosecutor general of lack of independence.

"First of all, nobody was heard. Iaralov and Plahotniuc are not in the country but Dodon, Corneliu Furculiţă are. They all must be heard. Prosecutors could have the expertise of the video recording, to find out if after a day or two, the PSRM employees had received or not the salaries, in order to analyze the causal link. The prosecutors could also interrogate the young lady who brought them tea and saw what happened to the bag: did Dodon take it or not, "said the PAS deputy.

Litvinenco specified that, according to the legal procedure, the ordinance of the prosecutor's office can be challenged in court by the authors of the notification - Andrei Năstase and Iurie Reniţă.

In reply, the General Prosecutor's Office issued a statement stating that the institution "will adopt solutions only on the basis of the law, regardless of the pressures generated by some political forces":

"The General Prosecutor's Office welcomes any point of view or demonstration that takes place in a civilized, democratic and peaceful manner. It is a guaranteed constitutional right that citizens can freely express their opinions and possibly - dissatisfaction.

However, when some political parties choose the path of flash-mobs in the fight for political relevance, this cannot be taken seriously.

The prosecutor's office is independent of the other powers in the state and remains firm in its position to adopt solutions and decisions only on the basis of relevant evidence, regardless of the forms of pressure generated by some political elements.

For those who claim to embody genuine democracy, we explain that disagreement with the solutions of the judiciary can be manifested more effectively, within the legal framework, with the use of criminal procedural instruments, higher hierarchical and judicial control. Only in this way will they have the opportunity to present their arguments and logical-legal reasoning, which obviously differs from the populist slogans expressed through flash-mobs ", according to the communiqué of the General Prosecutor's Office.

PUBLIKA.MD reminds that, on Wednesday, June 24, the Anti-corruption Prosecutor's Office ordered the non-initiation of the criminal investigation over the video that shows President Igor Dodon was receiving a bag of money, according to the MP Iurie Reniţă. The criminal case initiated in this case has been closed.