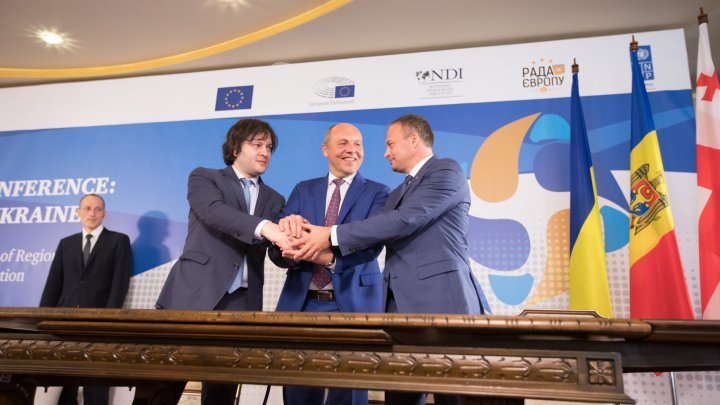 Parliament Speaker Andrian Candu and his counterparts Irakli Kobakhidze and Andriy Parubiy signed in Kiev the document to establish the Parliamentary Assembly of Moldova, Georgia and Ukraine.

Assembly will have an advisory status and its status will be approved at a subsequent meeting.

This inter-parliamentary structure will serve as a platform for promoting the interests of the citizens of the three states as well as for cooperation and exchange of experience on areas of common interest. The three presidents of the Parliament have unanimous need to be more internationally heard, especially linked to the position of Moldova, Georgia and Ukraine on the current common security challenges, including energy security, the illegal presence of foreign troops on the territories occupied by Russian Federation in the three states, misinformation and false news.

Taking into account the common aspirations to join the European Union, the heads of the three legislatures have committed themselves to cooperating for the good implementation of the reforms and commitments assumed to obtain the status of EU-associated states and to share good practices.

Speaker of the Parliament is accompanied by the visit of the Foreign Policy and European Integration Commission chairwoman Violeta Ivanov and by the chairman of the Friendship Group with Ukraine, Eugene Nichiforciuc.

The Head of the Legislature is participating in the second high-level inter-parliamentary conference Georgia, Moldova and Ukraine, which takes place in Kiev during June 8-10. The first high-level inter-parliamentary conference between Moldova, Georgia and Ukraine took place on 2 March in Chisinau, when the three Presidents of Parliament pledged to unite their efforts to promote common defense and security policies.
AFLĂ imediat Știrile Publika.MD. Intră pe Telegram