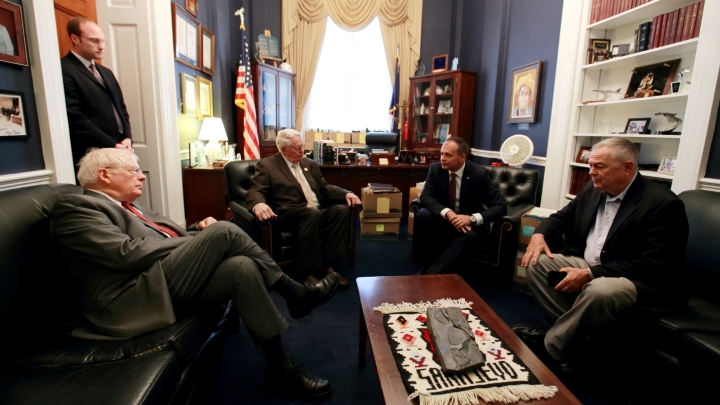 The bilateral strategic partnership, alternative energy projects for Moldova, developments in the country and the eastern neighborhood were discussed by speaker Andrian Candu at the US Congress and Senate.

Parliament speaker Andrian Candu had a series of bilateral meetings with senior US officials, including Senator Bob Corker, President of Foreign Relations Committee of the US Senate, Congressmen David Price and Dana Rohrabacher, Co-Presidents of the Subcommittee on Foreign Affairs on Europe, Asia and risks emerging, with Congressman Joseph Pitts, Co-President of the Friends of Moldova in Congress “Congressional Moldova caucus”, and Congressman Steve Chabot.

During these meetings, discussions were focused on the development potential of the Moldovan-US relations, identifying solutions to develop economic relations and attracting US investments in Moldova. The speaker has exposed the political support of our country in finalizing the negotiations and the subsequent signing of the Agreement on Transatlantic Trade and Investment Partnership (TTIP), which will provide special added value to both EU countries and Moldova, which has the status of an associated country to the EU.

“Moldova is interested in a bigger and more active presence of US companies in the national economy through direct investment and in having a more open US market for Moldovan products. Our country can become a gateway for transatlantic trade to Eastern market, because there is a free trade agreement with the countries of Eastern Europe - Belarus, Kazakhstan, Russia, Ukraine, and the Middle East - the Free Trade Agreement with Turkey” declared the head of Parliament to American officials.

Andrian Candu thanked for continuous support from the US in processes of carrying out democratic reforms, crucial for the development and prosperity of the country. In turn, US officials reiterated full US support for Moldova to achieve the objective of key reforms, and in the Transnistrian conflict settlement.

However, US officials have praised the successes of our country in implementing the road map on priority reforms and IMF preconditions for a country program. According to US officials, the effort bring Moldova back to normality on strategic cooperation.
On the other handSenator Bob Corker said that the US visit of speaker Andrian Candu "reaffirms the positive dynamics of the relations that the two countries have both at bilateral and parliamentary level," thanking the speaker for his contributions. According to the Senator, we are in a period where is needed solidarity with Moldova and Ukraine, giving citizens of these countries prosperity and security.

Congressman Joseph Pitts was interested in the prospect of bilateral cooperation, supporting the intensification of parliamentary diplomacy, increase of American investments in Moldova and strengthening the bilateral strategic partnership.

In their turn, Congressmen David Price and Dana Rohrabacher, Co-Chairs of the Subcommittee on Foreign Affairs on Europe, Asia and emerging risks were interested in Russian propaganda in Moldova and measures applied by the authorities for its control, including at the legislative level. The officials also discussed the upcoming elections, being expressed the US support for conducting free and fair elections in our country.

Congressman Steve Chabot, a connoisseur of the situation in Moldova, was surprised that his colleague Weber has drafted a resolution for Moldova, including a number of people in this project, without documenting himself on the “country file”.