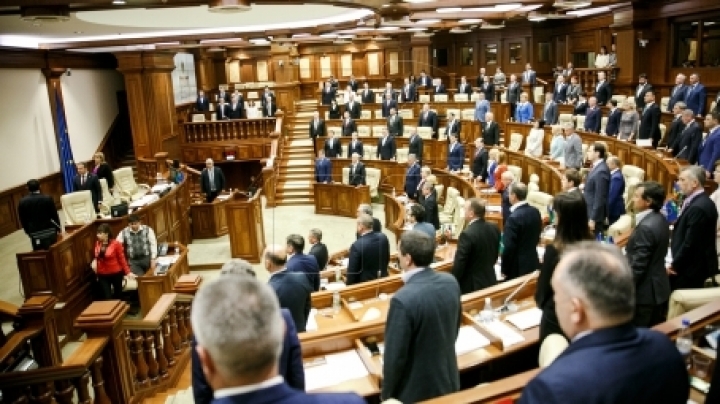 A cynical approach, addressed against the unlocking of country's economy. Thus Members of the parliamentary majority have labeled censure motion to be considered today in the legislature.

See below the full statement of deputies:

Members of parties and political groups forming the parliamentary majority believe that the censure motion submitted by PSRM, PCRM, PLDM is an unserious approach - based on its demagogic and cynical content - given the moral quality of the signatories.

We believe that this approach is cynical, because the signatories are being investigated for BEM fraud or are indirect beneficiaries who have stolen from the bank. Also criticizing the government for trying to solve the problem caused by the signatories of the motion precisely - is proof of demagogy against the Moldovan population.

The current government, by taking responsibility on the passed laws, is only unlocking country's economy by meeting all the commitments agreed with the IMF, to start reforms and improve the situation in Moldova, to strengthen the banking system by covering the holes with the involvement of the signatories of the motion.

We remind everybody the acctions of PLDM party, before which the Government will be forced to take responsibility. These PLDM MPs represent the party that allowed the disaster at BEM, by managing the bank directly from 2009 to 2014, that resulted in the theft of the bank. They are the party who pays, namely BEM money for election campaigns costs, for rent of PLDM headquarters, for paying car costs of MPs,  as M.Ciobanu and V.Pistrinciuc, for paying of media and journalists' home.

And in that time, LDP MP Chiril Lucinschi, which is being criminally investigated for how he financed his television from BEM money, he did not think about the people who will cover his and his party chief's theft.

Also remember the PSRM and PCRM's actions, before the Government having to take responsibility.

These MPs represent parties whose representatives, since 2005, led to the formation of the first scheme that was started embezzling of BEM, parties that were funded years in a row from this fraudulent scheme.

They pretend today that they have forgotten that, from 2008-2009, they have adopted the same decision with "Investprivatbank" putting the base on the BEM  embezzling, and that persons guilty of the fraud have remained unpunished.

Today, we find that those who founded the BEM destruction, PCRM and PSRM, shook hands with the PLDM, who later stole from the bank and then crashed it.

Connected to the content of the motion, the MPs signatories, accusing the government that will put the money on shoulders of the population are knowingly lying.

MPs signatories of the motion know well and expect that a significant part of the remaining debt to be recovered namely from the money they have stolen.

At the same time, to recover the remaining debt will decrease in the same way through to recover approximately US $ 650 million, money already identified in the investigation conducted by Kroll.

We, the members of the parliamentary majority, are determined to support all those necessary steps so that such cases are not repeated in Moldova.

We want as well as the population of Moldova, for Justice to shed light on the BEM case and those who have stolen should be punished, their possessions to be confiscated and the money recovered.

We want citizens to not suffer more than they already suffered because of those who treated BEM as a piggy bank for the party.

Next, we declare our support for the Government and for the decision to take responsibility on the package of laws respectively. Because we face a motion of censure against a responsible government, a vote of no confidence that those who stole actually just trying to cover his tracks, we will not participate in this debate false.

We ourselves, as citizens of Moldova, that those who participated in the "billion theft" to do, instead of electoral show, statements to the investigators, and then return the money to the people.