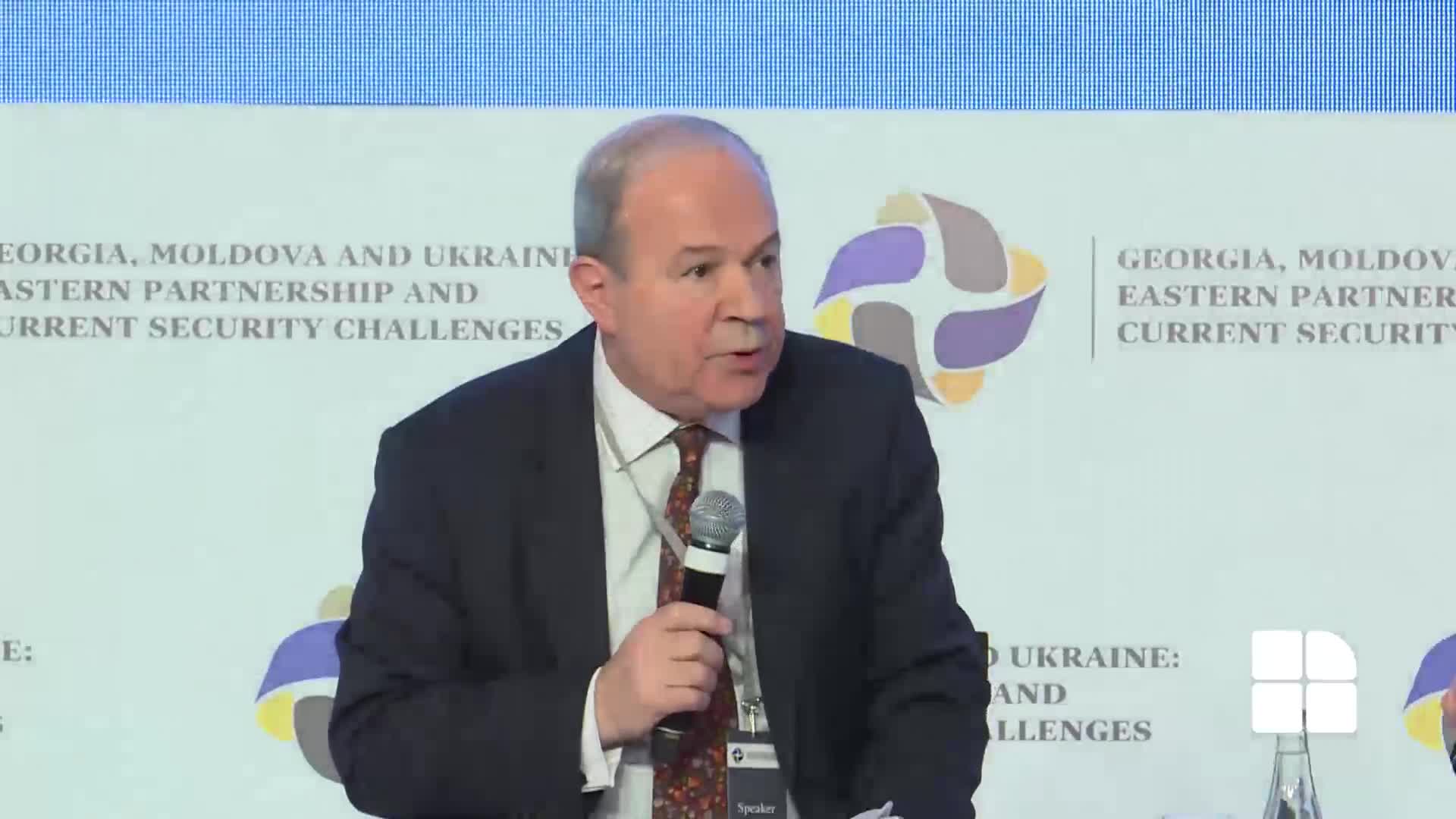 Security challenges posed by unresolved conflicts in Moldova, Georgia and Ukraine has been topic of the fourth talk panel in the Inter-parliamentary Conference Georgia, Moldova and Ukraine: Eastern Partnership and Current Security Challenges which is held in Chisinau on Friday.

"Thus, in order to over the challenges, we need to enforce the strategies in which allies and partners work together more closely. Let me highlight areas which we should concentrate on:

"First of all, allies and partners need to strengthen defense capabilities which means more investment. Moldova has significant challenges to be able to maintain legacies, Soviet equipment. The country needs to invest more not only in equipment but also training and to improve abilities. I think it's good signal to have commitment to expanding the troops in the future.

"Second, NATO need to persists presence in this part of the world such as more exercises involving in both sides allies and partners in the region. We need to increase maritime presence in the Black Sea, robust system not to let Russia turn Black Sea into a Russian lake.

"Third, we need to help Ukraine, Georgia to carry on their defense reforms, help them deal with hybrid warfare, mainline military threats. Moldova has benefited from the Defense Building program with NATO some years ago but its quite slow in implementing the programs. It's only now the first phase. I think Moldova needs to pay more attention and develop more resources to the effort, i mention the increasing defense responding, take advantage the useful systems that NATO provides.

"Then, we need some plans to maintain pressure on Russia for political solutions, first of all the Donbass war. Next, NATO should maintain open door policies. The best answer to Russian aggression and to lessen influences is to continue reforms, strengthen rule of law, the best defense is to become resilient, less acceptable to Russian pressure to interfere the countries.

Former Defense Minister of Georgia, Tinatin Khidasheli: "I want to emphasize the unresolved conflicts. Georgia also had a tragedy, an officer was killed in prison, and the Russians deny and do not want to return his family the body.

"That's the life in Georgia. It's not the first case in this genre. A young man was filled by security guards in our country.

"From human tragedies, we then have to face more complicated issues with statehood. We have little progress and hope, if the policies are not more realistic.

"We must take some common actions. Otherwise, we won't be able to focus on our goals.

"The Russians want to demonstrate more than things with Georgia. In 2008, Russia did not fight with us, Russia invaded Georgia.

"If we consider this concept, Russia fight not only with Georgia and Ukraine, they want to send message in larger level which makes us to ensure security. Georgia is opportunity for many".

"NATO will have to maintain its policy now. Georgia and Ukraine are complicated subjects. They will seek assistance in NATO co-operation. Ukraine needs to see whether you might be NATO partner. As for Russia's aggression, it is the need to strengthen the rule of law. "

"It's a myth that these conflicts are spontaneous. They are supported day by day by the Russia. We have a conflict in Eastern Ukraine which one of the most largest challenges for democracy. The war in Donbass proved that the potential for such conflicts exists in the eastern border of the EU.

"Russia has a significant role in these three conflict zones. It's the one who coordinates them. It exploits these conflicts for specific personal conflicts. In fact, Russia instigated these conflicts. It has entered much more dangerous external polices. Practically, elements of statehood have already been created in this secessionist formation.

"It also supported the creation of parallel state structures in Moldova.

"Additionally, citizenship offer for people living in these regions is another element of Russian politics. Majority of population in these zones enjoy the benefits. For example, it agrees to help pensioners and schools which have used Russian textbooks.

"Education in Transnistria is much harder, because Moldovan language is promoted there. Russia is able to use all the means at its disposal in these conflicts, and democratic development is seen as a threat. "

"At regional and national level, if we see the world as a network, there exists pressure on it, then the world will yield to these tensions.

"There are pressures in Bulgaria, with reference to the relationship between certain NATO states.

"Today we are facing new challenges, after World War I and World War II, we are dealing with new genres, with terrorism, business is growing very fast but politics remains behind. There is no longer border for business and technology.

"Citizens must the rights of others and find what binds us. We need better cooperation from the EU and the Eastern Partnership countries. We need to increase the visibility of the facts and policies of the European Union. I want to express my admiration for the 5th Eastern Partnership Summit. Now I'll finish with a phrase: Unite, we remain strong ".

PUBLIKA.MD reminds that the inter-parliamentary conference "Georgia, Moldova and Ukraine: Eastern Partnership and Current Security Challenges" takes place today in Chisinau, where the three states signed a declaration on the prospects for European integration and security in the region .

The meeting takes place at the initiative of the Chiefs of Legislation in the three countries.

About 150 high-level officials and international experts, including heads of law, MEPs, and representatives of the US Congress, will attend the event.