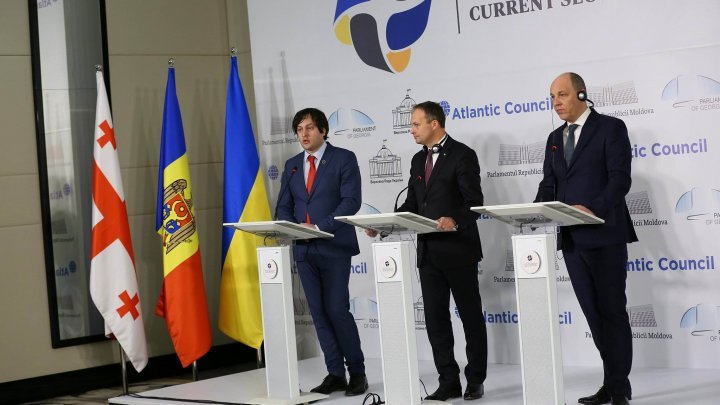 Moldova, Georgia and Ukraine are joining forces to promote common defense and security policies and transformation of countries on EU agenda. The announcement was made by the three Presidents of Parliaments at the joint conference held today in the margins of the High Level Inter-parliamentary Conference "Georgia, Moldova and Ukraine: Eastern Partnership and current security challenges".

"We decided to establish a trilateral meeting in the Eastern Partnership, an initiative that will make us stronger in the face of the current security challenges and in implementing reforms that will make us eligible for EU membership," said Andrian Candu, President of Moldovan Parliament.

According to President Andrian Candu, the three countries are undergoing the same challenges, transformation and reforms, moreover, the countries are pursuing European aspirations and are struggling with corruption, energetic dependence as well as other risks and difficulties.

"We are learning from each other, furthermore, we can unite to deal with all challenges we face", said President Andrian Candu.

The Presidents of Parliaments reiterated the countries agreed to promote common agenda to strengthen the defense and security capabilities and to make the three countries become eligible for EU membership.

Presidents of the Georgian, Moldovan and Ukrainian Parliaments today signed a declaration committing themselves to promote common defense and security policies.

The conference was organized in partnership with the Atlantic Council at the initiative of the Moldovan, Georgian and Ukrainian Legislators. The purpose was to discusses issues related to information security, energy, defense as well as assurance of stable economic growth and the rule of law in the region.

The event gathered around 150 high-level officials and experts, including speakers from Legislative, MEPs, US Congress representatives, notable international and regional experts.

Today, the three Presidents of Parliament will sign a joint declaration to join their efforts to promote common defense and security policies.