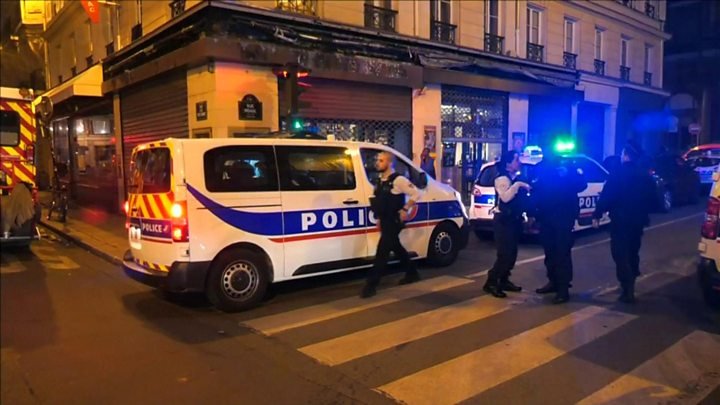 The suspect in a deadly knife attack in central Paris on Saturday evening was born in 1997 in the Russian republic of Chechnya, a judicial source says, writes BBC.

He was also on a watch list of people who could pose a threat to national security, other sources said.

The attacker killed a 29-year-old man and wounded four other people in the busy Opéra district before being shot dead by police.

The Islamic State (IS) group said it was behind the attack.

French President Emmanuel Macron tweeted (in French): "France has once again paid in blood, but will not give an inch to the enemies of freedom."

France has been on high alert following a series of attacks. More than 230 people have been killed by IS-inspired jihadists in the past three years.

Security forces have identified him, although he was not carrying any identification papers and has not been officially named.

The judicial source told French media the suspect had no criminal record and that his parents had been held for questioning. He is believed to be a French national.

The man had been categorised as "fiche S", sources said.

This flags people considered to be a possible threat to national security (the S stands for Sûreté de l'État - state security) and allows for surveillance without being a cause for arrest.

It includes those suspected of Islamist radicalisation, but is wide-ranging and covers such groups as political extremists, gangsters and even football hooligans.

In 2015, then PM Manuel Valls said there were 20,000 names on the list, about half related to Islamist radicalisation.

This would be the first time an assailant of Chechen origin has carried out a terrorist attack in France.

France is home to some 30,000 people of Chechen origin.

Interior Minister Gérard Collomb said the man who died was a 29-year-old passer-by, but gave no further details.

Eyewitnesses described him as a young man with brown hair and a beard, dressed in black tracksuit trousers.

He shouted "Allahu Akbar" (God is greatest) during the attack, witnesses said.

The man tried to enter several bars and restaurants but was blocked by people inside.

Police first tried to stop the assailant with a stun-gun before shooting him dead, nine minutes after he began the attack.

Jonathan, a waiter at a local restaurant, told AFP: "I saw him with a knife in his hand. He looked crazy."

He said a woman, stabbed by the attacker, ran into into the restaurant bleeding. The assailant tried to follow her inside, but was fended off and finally fled.

Two of the wounded in the attack are in a serious condition but do not have life-threatening injuries.

Later the IS group said it was behind the attack, in a brief statement posted on its news outlet.