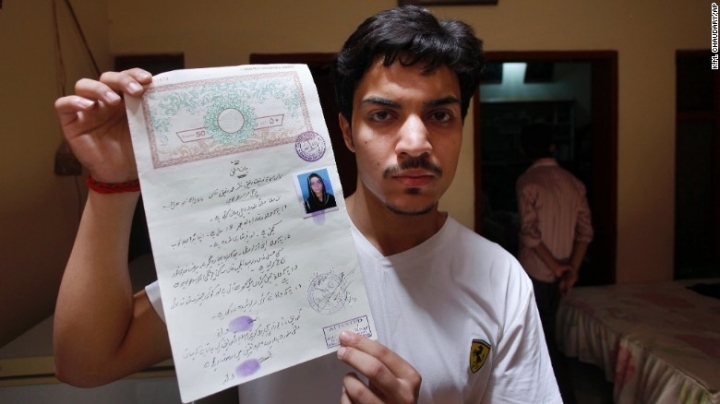 A young Pakistani woman was still breathing when police say her mother and brother set her on fire for eloping against their wishes, reports CNN.

An autopsy released Thursday said Zeenat Rafique, 18, had traces of smoke in her respiratory tract, indicating she was alive when she was set ablaze.

Rafique had also been strangled, the autopsy said, according to Geo News. The young woman was laid to rest Thursday by her tearful husband, 19-year-old Hassan Khan.

Rafique's family had refused to accept her body.

Shahida Bib, Rafique's mother-in-law, said Rafique and her son had been secretly dating for five years. The young couple met in school. She said the two married on May 29.

After eloping, she moved away. But Rafique returned to her family's home in Lahore because she thought a reconciliation was possible, Punjab police representative Nabeela Ghazanfar said.

Khan, the young widower, told police that Rafique had feared for her life after the couple eloped.

"I only allowed her to visit her parents after her paternal uncle guaranteed her safety," Khan said, according to Geo News. But when Rafique arrived, her mother and brother tied her to a bed, poured gasoline and set her on fire, said Ghazanfar, the police official.

The mother, Parveen Bibi, turned herself over to authorities and has expressed no sorrow for her actions, police said. She's now in custody. The brother, Ahmer Rafique, is on the run, police said.

About 1,100 women were killed by relatives in Pakistan last year, according to the country's independent Human Rights Commission. The crimes originate from tribal practices and are often meted out as punishment for behavior viewed as bringing dishonor to a family or village.
AFLĂ imediat Știrile Publika.MD. Intră pe Telegram