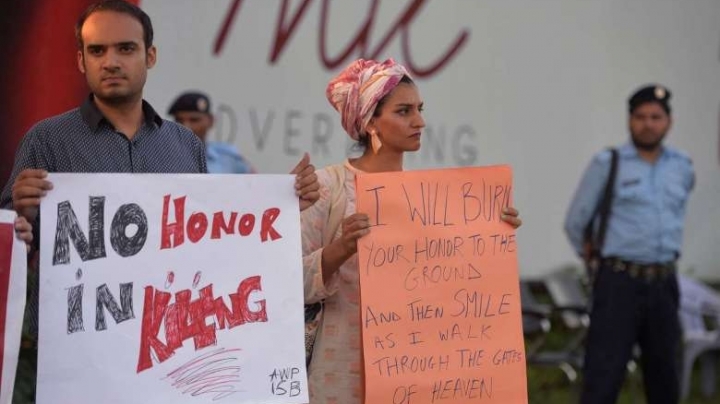 Under a new law perpetrators of so-called "honor killings" can no longer walk free in Pakistan if pardoned by the victim's family, reports CNN.

The bill, which failed to gain traction when it was first introduced in March, passed unanimously in both houses of parliament on Thursday, 6 October 2016.

"A vicious circle has now come to an end," Senator Farhatullah Babar told CNN. Now, a killer will face a minimum sentence of 25 years in jail, Babar said. "No murderer will be able to walk away free even if his parents or family members forgive him for killing his sister, wife or mother in the name of 'honor.'"

Pakistan's prime minister, Muhammad Nawaz Sharif, has been under pressure to prosecute those who commit violence against women. "Honor killings" typically involve a woman being slain by a relative who believes she has brought shame upon the family.

"There is no honor in honor killing," he said earlier this year and again in a statement after Thursday's vote.

Parliament also passed another bill that would make it easier to convict rapists thanks to mandatory DNA testing.

This milestone comes three months after a social media star and "modern day feminist" was killed by her brother for "dishonoring" the family.

According to the Human Rights Commission of Pakistan, almost 300 women were victims of such killings in the first half of 2016. In a 2015 report by the World Economic Forum, Pakistan ranked 144 out of 145 countries on gender disparity.

Sharmeen Obaid Chinoy, an activist whose documentary on honor killings won an Oscar earlier this year, called the bill "the first step."

Others view the landmark reform with a critical eye, including opposition senator Sherry Rehman.

"I strongly want to say that this bill still needs a lot of amendments," said Rehman, who was the first parliamentarian in the country to introduce a bill against honor killings.
AFLĂ imediat Știrile Publika.MD. Intră pe Telegram