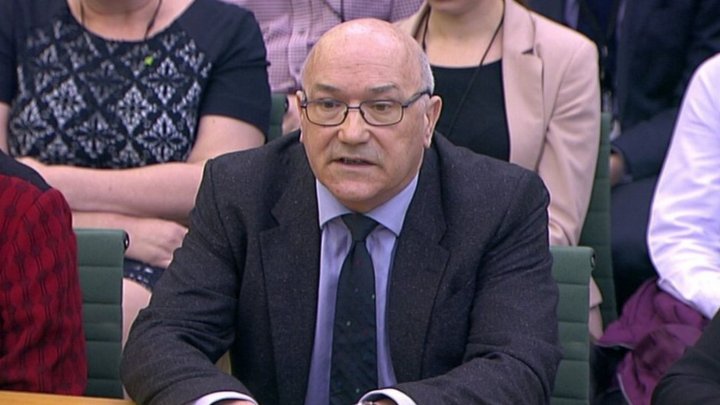 Oxfam's chief executive Mark Goldring has said he is sorry for the damage the charity has done to the people of Haiti and the wider efforts of aid workers.

He is facing questions from MPs about the sexual misconduct of some staff in Haiti after the 2010 earthquake.

The International Development Committee will also hear from chair of trustees Caroline Thomson.

Mr Goldring also apologised for remarks made about murdering babies in cots which he made in defending Oxfam.

In an interview with the Guardian last week, he said: "The intensity and ferocity of the attack makes you wonder, what did we do? We murdered babies in their cots?"

He said he was "deeply sorry" for the comments that he had made while "under stress".

Oxfam, which has almost 10,000 staff working in more than 90 countries, denied a cover-up but its handling of the scandal is being investigated by the Charity Commission.

Since the story broke, Mr Goldring, who joined the charity in 2013, said 26 reports of recent and historic incidents have been made by Oxfam workers - 16 of them outside the UK.

Of the scandal, he said: "I am sorry, we are sorry, for the damage Oxfam has done both to the people of Haiti but also to wider efforts for aid and development by possibly undermining public support."

aroline Thomson, the chair of trustees, and Winnie Byanyima, executive director of Oxfam International, both told the committee they were "ashamed" of what happened in Haiti.

Ms Byanyima said she has spent her life protecting women. "This is painful for me," she added.

Mr Goldring said there was now a safeguarding team and helpline at Oxfam and the charity was seeking more independent support.

Committee chairman Stephen Twigg said his committee would conduct a full inquiry into sexual misconduct in the aid sector in the wake of the scandal.