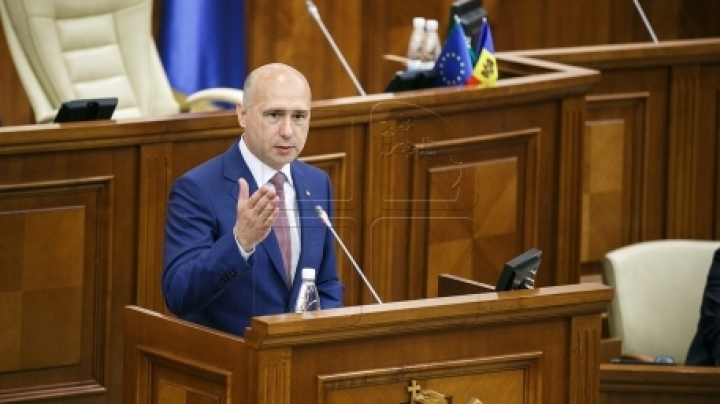 "It’s a desperate call to chaos, political instability and early elections. The opposition wants early elections because it starts to fear the government’s results,” Filip said.

The Prime Minister says he has all the reasons to combat it: "A country cannot be ruled from the street or from outside. We have avoided this deeply negative scenario and set Moldova on the right track. But we took the country in such a state namely from the PLDM, the signatories’ of today’s no-confidence motion. They led the Government six years."

Pavel Filip says the Government has managed to stop the economic decline, as the GDP has gone up. On April 1, the pensions were raised by 10%. As of May 1, the minimum salary was increased to 2.100 lei. As of July 1, the doctors’ salaries went up 20%, and as of September 1, the teachers’ salaries will be increased by 9 %. The premier has assured the state does have money to pay the increased pensions and wages, given the bigger revenues to the budget. Pavel Filip has made one more important announcement: starting from fall the external funds disbursements would start, and that means re-launching economy.

"Had we had an agreement with the IMF back in 2013, the billion’s theft could possibly not have occurred," the premier specified.

The Prime Minister states he does not agree burdens have been laid on the business sector for the last six months. On the contrary, scores of support measures have been undertaken, as the moratorium on state controls and the 25-per-cent reduction of permissive documents. The Premier has assured the business community that number will plummet even more.

According to Pavel Filip, the situation in agriculture and in the farmers’ subsiding fund is improving. When he started to head the Government the debts to the farmers were half a billion lei. The subventions fund is 50 % bigger this year than last year.

"I feel awkwardness for the PLDM colleagues signing the censure motion, as they know that the representatives of their party are largely responsible for those arrears," Pavel Filip stated.

He has rejected the idea of a ‘captive state’ from the no-confidence bill, underlining the most important and courageous reforms of the last years are presently implemented.
"Why had you not been so vocal on the topic of the captive state before you were caught having stolen from BEM (Banca de Economii), the customs, the fiscal service, etc.? Or you may have forgotten that the disaster at BEM started when that bank was directly managed by the PLDM people? The state was not captive then, because the money was going to the party and you felt good. Or maybe you think that you would hide behind the Socialists and your ears will not be seen? The things with the PSRM (Socialists) are even clearer in terms of captivity. This party is captive from a single place and that is very transparent," Pavel Filip concluded.

“Tidying up the banking system hits very big interests, including from abroad, in areas from where some opposition leaders are instructed,” the Premier added and said he was going to the very end in securing the sector.