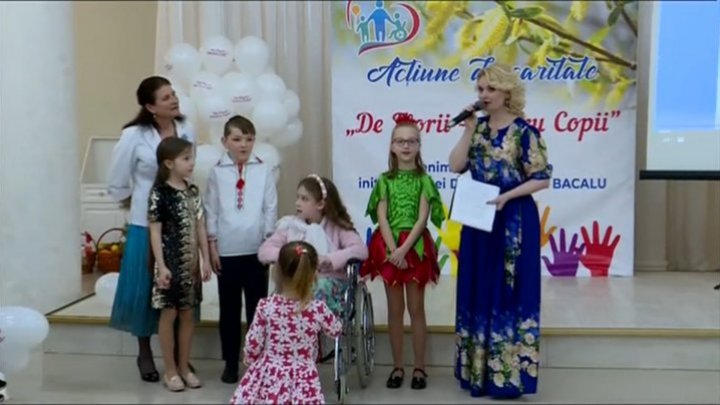 Hundreds of people have gathered over 300,000 lei to help five sick children, two of whom are diagnosed with cancer. This charity action was organized at initiative of Democratic Party deputy Elena Bacalu.

Daria Grosu is 10 years old. She was diagnosed with cerebral palsy at birth and abandoned by her parents. She's now living in a social center in Cahul. Fortunately, that charity event donated €5,000 for her complicated operation.

"She needs to undergo a surgery. We also found a doctor who agreed to make it in Chisinau. One of our most ambitious dream is to see her walking on her legs and running with other kids", said said Emilia Mocanu, director of social center.

Valeria Câneva is another girl who's fighting against paralysis. Her parents found this illness when she was only nine months. Her mother said that she underwent already five operations and a new one will be in May.

"Doctors never say she will lose in this fighting. We only need time, patience and lots of works", said Ludmila Câneva, mother of Valeria.

Sergiu Burlacu also needs our support. He was diagnoses with cancer when he was only three and his younger brother with multiple sclerosis. After a long medical treatment in hospital, they remain home but need to undergo further intervention.

"We passed MRI which cost us 6,000 lei. We need such money every three months", said Olesea Burlacu, their mother.

Along with a group of businessmen, PDM deputy Elena Bacalu came to each family and offered support.

"We found lots of children facing health issues and needing financial supports. We have organized this event since last year with message "Flowers for children", said Elena Bacalu, PDM deputy.

"I contributed my salary and we will carry out further meaningful programs with my colleagues not only in this festival but also in other occasions", said Otilia Drăguţanu, PDM deputy.

Previously PDM deputies announced to donate their salaries in March for charity events.