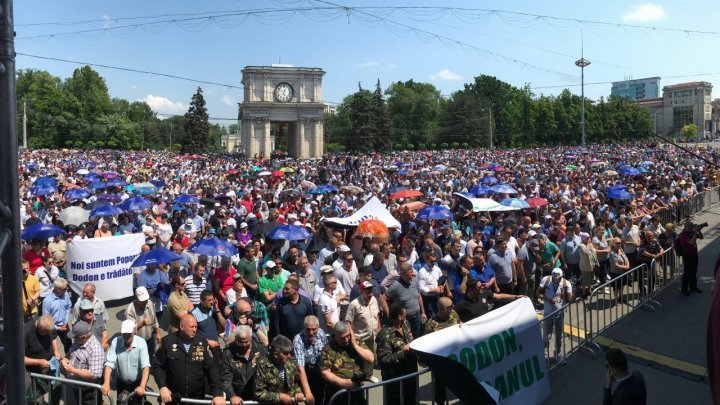 Over 30,000 people from all corners of Moldova have gathered on Great National Assembly Square for a peaceful rally to guard our Moldovan Constitutional decision and condemn fiercely all treason actions.

Moreover, the protesters requested immediately the dismissal of Igor Dodon due to his betrayal and his acceptance of foreign financing for his party as well as his power usurpation in the state.

PDM President Vlad Plahotniuc who also present at the rally, urges the people to be united and decisive in order to protect our country in front of an irresponsible politician group who have tried to capture our country by illegal elections and wanted take over our state institutions by force.

"It's a state blow, coordinated with Igor Dodon, who is influenced by foreigner, who still imagines to be a president. He's no longer our country's president. Down Dodon! He is a president who needs guidance for everything he made for our country.

He attempted to federalize our country and sell our country to foreigners. He betrayed the people. After everything he has done, he needs to be dismissed immediately. We need to organize the elections to vote for a new president, a president who works for our people", said Vlad Plahotniuc.

There are no other solutions following crisis triggered between PSRM and ACUM. Political class is compromised. No governing alliance has been created in three months. Some parties decided to fight for functions, not for people. It's normal that people are the ones who decide who should become deputies, said Pavel Filip.