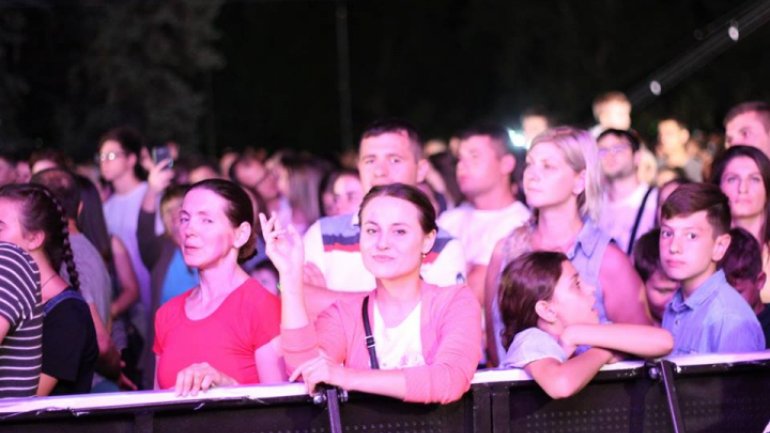 More than 100,000 people enjoyed dancing and singing in an unprecedented concert last night in the Great National Assembly Square.

The concert was warmed up with performances by Smiley and Holograf from Romania but also Nicolai Baskov, Polina Gagarina and Dmitrii Malikov of Russia.

Holograf's fans were crazy along with the romanian band's rock songs.

Smiley did not let down his audience as well.

"We have been waiting for you for years! Staying independent, staying strong, staying free!", Said the Romanian artist, Smiley.

"Good evening, Chisinau, I congratulate you on greatest celebration, I here to give you unforgettable moments," Dmitrii Malikov said.

The foreign singers said they liked the public in Chişinău very much and came with happy messages.

"I love and appreciate when they sang and danced along my songs!" said the singer from Romania, Smiley.

"Be independent and free! Do what you want and act on your own wishes," said Holograf member, Dan Bitman.

People were delighted in the center of the capital, and the Great National Assembly Square turned into a huge music hub.

The spectators were impressed by the marvelously wonderful concert and were glad to have the opportunity to see their favorite artists.

"It's great, the concert is great."

Finally, the atmosphere was warmed up by Dj Andrew Rayel.

"The audience of Chisinau are the best audience I've ever seen. The energy and the reaction to every piece of my actions is extraordinary," said DJ Andrew Rayel.

The concert was broadcasted live by Publika TV. Ten cameras, two cranes, one steadicam, two drones, two mobile cameras, nearly two thousand meters of cable were used. The image and sound were at the highest quality.

Publika broadcast live all the events in the PMAN on Sunday for over 12 hours. In order for everything to come out perfectly, over 50 cameramen, producers and technicians worked intensively. The Concert dedicated to Independence Day was organized with the support of Vlad Plahotniuc Foundation "Edelweiss".