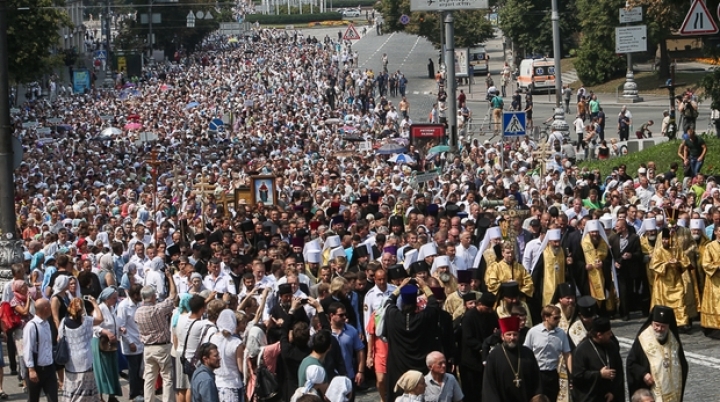 More than 10,000 believers from all over Ukraine came to Kyiv to celebrate the anniversary of Baptism of the Kyivan Rus on July 27.

The representatives of Ukrainian and Russian branches of the Eastern Orthodox Church had come to the capital by buses from eastern and western Ukraine to hold a prayer in the place where the Kyivan Rus adopted Christianity 1028 years ago.

The prayer had to be conducted under the severe security measures maintained by the law enforcers because the prayer and the cross walk that took place for weeks before the Kyiv gathering were organized by the Ukrainian Orthodox Church of Moscow Patriarchate.

The church used to be the most popular one in Ukraine, but now it sparks negative reactions. It is directly subordinated to the Kremlin-friendly Moscow patriarch, which isn’t adding it points in Ukraine, which has been in conflict with Russia for more than two years over Crimea annexation and invasion of the country’s eastern regions.

The church’s parishioners started their pilgrimage to Kyiv weeks ago from Ternopil, 400 kilometers west of Kyiv, and Svyatohirsk in Donetsk Oblast, 600 kilometers east from Kyiv. They faced several attempts to stop them.

When the procession that moved partly on foot and partly by buses was a few kilometers away from Kyiv, police discovered several grenades and hoax explosive devices hidden on the highway ahead of them.

Following it and afraid of further provocations, police forbade the pilgrims to enter Kyiv by foot.

“It was too dangerous, considering the explosives we found,” Khatia Dekanoidze, the head of the National Police of Ukraine, told the Kyiv Post.

The police provided buses so the believers could safely get to the place of celebration, and blocked streets in the city center for safety concerns.