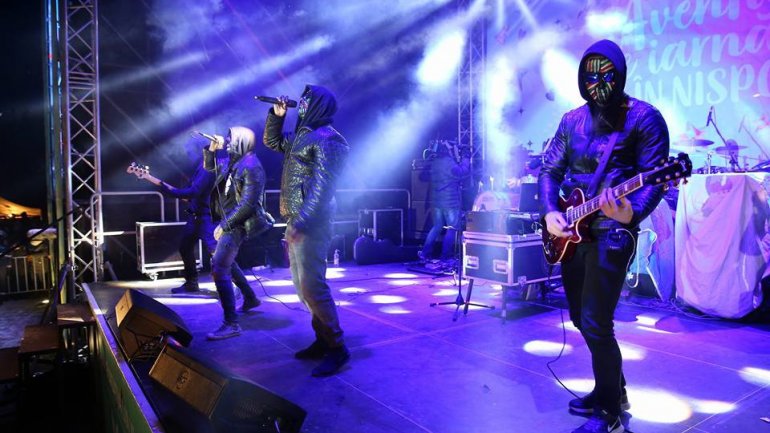 A concert was held last night in Nisporeni with dozens of local and foreign artists.

The legendary 3rei Sud Est has entertained the guests with their most well known songs. The mood being kept up by Carla's Dreams.

The beautiful Romanian singer, Antonia has performed with her best songs from the past few years.

Many of the visitors have started dancing during the event. Over 10 000 people have came from all over the country to attend:

"It is amazing. We are from Ungheni and came here to enjoy the show, we never expected such a thing."

"I waited long to hear Antonia, Carla's Dreams and 3rei Sud Est. I was delighted when I heard that they will come to Nisporeni."

During the event were also organized a number of folk spectacles. Those present, had the chance to admire an amazing mask parade.

Meanwhile, people could have fun around the Christmas Fair and were warmed up with free mulled wine and snacks. Organizers have prepared a few tons of mulled wine.

People remained pleased and had a night to remember:

"The mulled wine was amazing. You can feel the holiday spirit."

"It tastes amazing, thank you."

Children were not forgotten, they could enjoy their time on the ice rink and slides:

-If it your first time at the fair?

-Are you good at ice skating?

Multiple officials have also came to the event.

"I wish to congratulate everyone with the beginning of the new year. We will continue to do everything to make sure that children of Republic of Moldova will have no doubts of their future" Prime Minister Pavel Filip said.

"Our colleges, that stand here today with me on this stage, as Mr. Prime Minister said, are doing everything to change Republic of Moldova, including Nisporeni. To make the city richer, more beautiful and prosperous" President of Moldovan Parliament, Andrian Candu declared.

"Everyone criticize us and say that there is still much left to do. I would like for those who criticize our work to join us so that we can work together to solve all problems here, in Nisporeni" former President of Nisporeni, Vasile Bîtca stated.

"I wish to express my gratitude toward president of Edelweiss foundation, Vlad Plahotniuc, for his many actions to support our culture, which not many people speak of often, for helping to publish books, assisting national artist, filmmakers and actors" Minister of Education, Culture and Research, Monica Babuc said.

The night ended with a firework display.

The Christmas Fair was organized by Vlad Plahotniuc's foundation "Edelweiss". Its gates will be opened for visitors until 31st January.