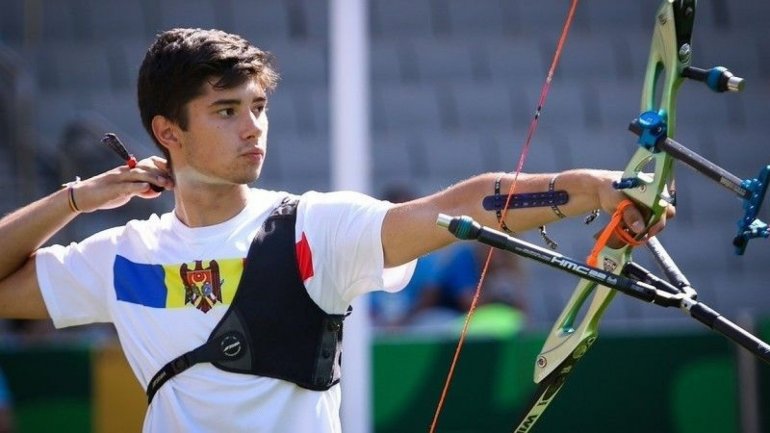 Sportsmen from Republic of Moldova had an outstanding result in 2017, in nearly all types of sports.

At the beginning of March, Dan Olaru he became European vice-champion in bow shooting.

The young archer from Moldova, of only 21, has passed all the stages of the competition, until he wasn't defeated in the finals in French by Italian David Pasqualucci, with the final score 2 - 6.

The silver won at the European Championship was the best performance in Olaru's career in the individual senior probe. Last year, Olaru, along with his colleague Alexandru Mîrca became European champions in a mixed competition and also in 2016 Dan Olaru became world vice-champion among juniors.

For wining silver, the arches has received for his performance from the stat 66 000 lei.

Andrian Mardare received gold in the probe for throwing spears. The sportsmen from Hânceşti established a new national record, managing gain the result of 82 meters and 34 centimeters. The previous score of Mardare being of 78 meters and 47 centimeters.

In the same competition, Alexandra Emilianov won bronze in discus throw, having registered 54 meters and 66 centimeters.

In May Moldovan fighters had a success in European Championships that took place in Novi Sad, Serbia.

Mariana Cherdivară-Eşanu became vice-champion in the under 58 kg category. In the final she faced Grace Jacob-Bullen from Norway. In a moment, due to a marvelous procedure, Mariana managed to lead with 3 - 1.

Still, the fighter from Călăraşi has failed to maintain her position to the end of the time. In the last six minutes, Grace Jacob-Bullen has made the score 3 points and won gold. Therefore, due to the fact that she gained 2 more points in the final match, while Mariana only 1 point.

For winning silver Mariana Cherdivară-Eşanu has also gained from the state 66 000 lei.

Svetlana Saenko won bronze in the under 75 kg category. In the small final of the competition she faced Anne-Carmen Schell from Germany.

Andrei Perpeliţă also returned home with bronze from Europe. The fighter has defeated in the finals Ukraine's representative, Petro Bileiciuk, in the under 61 kg category.

For winning bronze in Europe, Svetlana Saenko and Andrei Perpeliţă have received from the state 45 000 lei.

In June, boxer Vasile Belous came home with bronze from European Championship which took place in Ukraine, in Kharkiv.

The sportsman from Moldova managed to get to the competition's semifinals in the under 69 kg category, where he was defeated by Abass Baraou from Germany.

Belous was the sole Moldovan sportsmen who returned with a medal from Ukraine. This is the biggest performance of the sportsman from Petru Caduc school, from Grimăncăuți village, Briceni district.

For wining the bronze medal in the tournament, Vasile Belous was also awarded with 45 000 lei by the state.

In the first month of summer, Aaron Cook, won bronze in the World Taekwondo Championship (Olympics version), which took place in Muju, South Korea. Cook has won third place in the under 80 kg category after he lost in the semifinal against Beigi Harchegani from Azerbaijan.

But our sportsman has ensured the bronze after qualifying in the semifinal. Aaron Cook has defeated Sen Qiao from China. It is the second bronze medal the sportsman managed to win. He also managed to to have the same performance in 2015.

For wining bronze, Cook has received 90 000 lei from the state.

The young athlete, of only 18, Alexandra Emilianov had the most important success in her career. In Grosseto city, Italy, she managed to become Europe's champion among juniors under 20 years old in discus throw. Alexandra managed to gain the result of 56 meters and 38 centimeters, being followed by Polish Karolina Urban and Kristina RakOcevici from Montenegro.

At the end of July, Oleg Nuţă and Ilie Sprâncean became world champions in canoe. Moldovan sportsmen managed to take first place in a double canoe probe of 500 meters within the Youth World Championship, which took place in Romania, at Pitești.

Nuţă and Sprâncean had the result of 40.912 seconds, having won with nearly a second their opponents from the host country, Cătălin Chirilă and Constantin Diba, who won second place.

For winning the gold, the two young sportsmen received from the state 45 000 lei each. It was the second success for Moldovans in the summer canoe competitions. In July the team Oleg Nuță - Ilie Sprîncean have won two medals in the European Youth Competitions in Belgrade. The two won first place in the 500 meter distance and second in the 1000 meter distance.

In August, fighter from Republic of Moldova, Anastasia Nichita won silver in the World Youth Champtionship which took place in Tampere, Finland.

Anastasia Nichita was defeated in the finals of the under 59 kg category by Japanese Yuzuru Kumano.

Our sportsman had an excellent result in the competition. Nichita won in a row duels against Chinese Jing Jiang, Nabira Esenbaeva from Uzbekistan and Norway fighter Grace Bullen. The sivler medal won by Anastasia Nichita, will bring her from the state 30 000 lei. Nichita has also won in 2017 two silver medals in the European Championship for Juniors and Youth.

In the middle of August, Judo fighter Eugen Matveiciuc won gold in the World Championship among cadets, which took place in Capital of Chile, Santiago.

In the big finals of the under 81 kg competition, our sportsmen has faced Agustin Jil from Argentina. On his way to the finals, 15-year-old Matveiciuc, has defeated opponents from Brazil, Armenia, Canada and Tajikistan.

"I always went to each fight as if it was my first. Bit by bit I reached the finals and became the champion. Truth to be told, it was my aim and I am very proud to have reached it" Eugen Matveiciuc said.

"He lacks talent, but his efforts and ambitions makes up for it, he has character and is confident in everything he does" coach of the national Judo team, Veaceslav Bacal said.

The amazing performance of Eugen Matveiciuc was not overlooked by officials from Moldova.

He met with president of PDM, Vlad Plahotniuc, who promised to boost his career. Matveiciuc has also received a diploma from Japan Ambassador to Moldova, his excellency Masanobu Yoşii.

Also in 2017, our young Judo fighter has won gold and three bronze medals in the European Cup. At the same time, he was awarded with bronze in the Olympic Festival of European Youth, which took place in Győr, Hungary.

At the end of summer, Serghei Marghiev won the sole medal of the national team at the Taipei World Universiade. Marghiev won bronze medal at the Hammer throw competition, managing to score a distance of 74 meters and 98 centimeters.

Marghiev was defeated only by Pawel Fajdek from Poland, who became champion and by Pavel Bareișa from Belarus.

"I was under harsh weather conditions. The humidity was high and it was hot. I was always under stress. Finally, I could perform well and bring home the medal I hoped for" Serghei Marghiev said.

Sportsmen from Moldova have also shown excellent performance in November. Judo fighter Dorin Goţonoagă won gold in the European Youth Championship from Montenegro, for people under 23 years old. In the final category of the under 81 kg he defeated Dominik Druzeta from Croatia. This victory represents the 22-year-old sportsman's biggest performance in his career.

"A day before this I thought how to win a medal. I was thinking of gold, because I believe I was on the same level as my opponents, meaning I had all the chances to win" Dorin Goţonoagă said.

"We were expecting great results. Perhaps we didn't expect him to win gold, as there were many well prepared people" coach Mahai Buiuc declared.

Greco-Roman Wrestler from Moldova Daniel Cataraga has also won gold in the World Youth Championship, which took place in Poland, at Bydgoszcz. In the finals of the under 71 kg category, Daniel won with 5 - 0 against Robert Fritsch from Hungary. Before the final match he won against Artur Politiaev from Ukraine, Farșad Belfakeh from Iran and Ricardo Abbrescia from Italy.

"It was very difficult, but thanks to all the work I input I managed to gain this result and am very proud. I did not expect gold, but the medal was expected after the Paris fight where we we got 7-0 and I was defeated by 10-8 ", said the Moldovan fighter in Greek-Roman style, Daniel Cataraga.

"He is only 22 years old, the future is still ahead. I think he must have an Olympic medal at the age of 27. We do not hurry because we never have to predict, we do not have to jump ahead, we have to work", said coach Ion Gheorghita.

For the performance, the 22-year-old fighter was awarded 5,000 lei by the leadership of the federation.

"There is such a tradition, there are some criteria. Today we have nothing on the account, we do not have sponsors," said the federation president, Victor Peicov.

In 2017, Daniel Cataraga was about to win a bronze medal at the World Championships in Paris. In the fight for third place, the Moldovan champion led 7-0 against the Iranian Mohammad-Ali Geraei, but eventually lost 8-10 and was ranked only fifth.