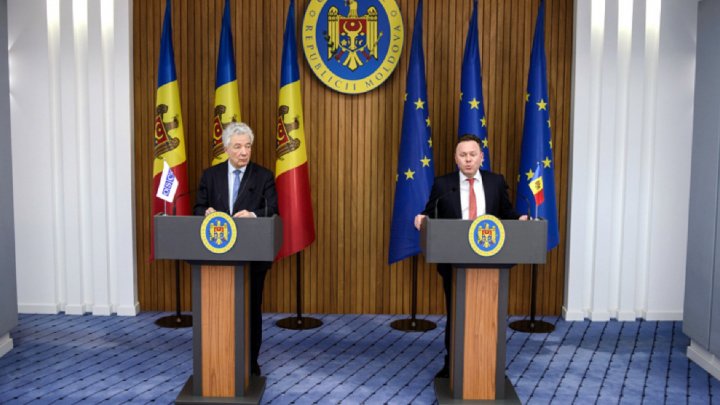 Evolution of the Transnistrian issue settlement still seems uncertain and only parties involved in the conflict can resolve the issue, the foreign partners only act as mediators. The statements were made by OSCE Special Representative Thomas Mayr-Harting in a joint press conference with Moldovan Deputy Prime Minister for Reintegration Alexandru Flenchea.

After the meeting, Flenchea said the discussions between the two were consistent. However, while the names of officials have been changed in the last years, the topics addressed seem irredeemable.

The OSCE Special Representative for the Transnistrian settlement process, Ambassador Thomas Mayr-Harting, told Chisinau authorities that they should not wait for someone else to solve their problem, but to roll up their sleeves.

"We come here to find out the developments of Transnistrian situation. It's important to know that we are mediators. It is the role of the parties to find solutions on their own," said the special OSCE representative.

The Deputy Prime Minister for Reintegration was asked to comment on the surrender of the authorities to the separatist regime in Tiraspol, after Chisinau withdrew the ban on Transnistrian vehicles crossing border.

Alexandru Flenchea denied that the authorities on the left bank of the Dniester blackmailed Chisinau.

The official insists that the main purpose remains for cars from the Transnistrian region to obtain neutral license plates. Moreover, it seems that the Government does not have a vision about what will happen if, from April 1, Ukraine will impose a traffic ban for vehicles with Transnistrian numbers.

"I cannot speak on behalf of other countries. I represent the Government I belong to. Only three percent of the estimated number of cars on the left bank of the Dniester have been registered with the plates," said the Deputy Prime Minister for Reintegration.

Today, Thomas Mayr-Harting will go to the left bank of the Dniester, where he will hold a press conference with the political representative from Tiraspol, Vitali Ignatiev.