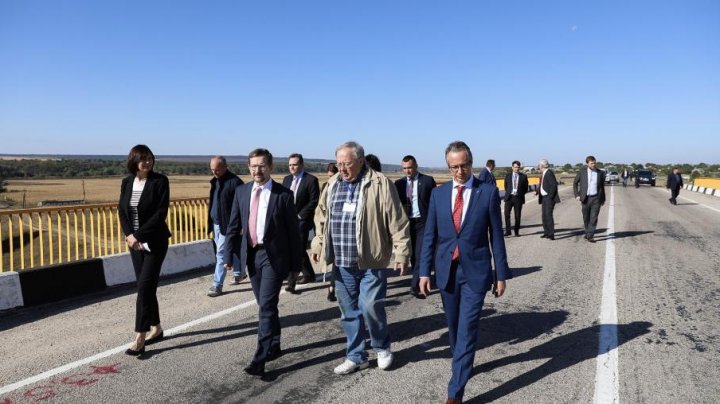 The progress achieved by Chisinau and Tiraspol in the Transdniestrian settlement process brings a positive change to local populations and provides a good example of conflict resolution for the whole OSCE area, said OSCE Secretary General Thomas Greminger during a three-day visit to the Republic of Moldova, which concluded on Thursday.

During his first trip to Moldova in the capacity of OSCE Secretary General, Thomas Greminger met in Chisinau with the Moldovan President Igor Dodon; Speaker of Parliament Zinaida Greceanii; Deputy Prime Minister for Reintegration and Chief Negotiator Vasilii Sova; State Secretary of the Ministry of Foreign Affairs and European Integration Tatiana Molcean; Minister of Defenсe Pavel Voicu; and Bashkan of Gagauzia Irina Vlah. In Tiraspol, Greminger had meetings with the Transdniestrian leader Vadim Krasnoselsky and Chief Negotiator Vitaly Ignatiev.

The Secretary General reconfirmed the OSCE’s full support for achieving a settlement of the Transdniestrian issue based on the sovereignty, independence and territorial integrity of the Republic of Moldova while at the same time providing a special status for Transdniestria. “I welcome the political will and commitment of Chisinau and Tiraspol to work in the spirit of confidence-building towards fulfilling agreements from the “Berlin-plus” package and beyond,” Greminger said. “I am confident that in the course of the upcoming “5+2” meeting organized by the Slovak Chairmanship in Bratislava and the planned Bavaria conference, the Sides will consolidate the existing progress and generate new agreements for the benefit of people on both banks. The OSCE Mission to Moldova will continue to work closely with both Sides to facilitate dialogue and trust in the settlement process.”

Greminger commended as promising the renewal of a military dialogue between the Republic of Moldova and the Russian Federation on the removal of ammunition and armaments from the Cobasna depot. “The OSCE is mandated to ensure the transparency of this process and to co-ordinate financial and technical assistance offered to this end,” said the Secretary General. “The OSCE stands ready to bring in international, independent evaluators to verify the state of ammunition in Cobasna if required.”

Meeting senior officials in Chisinau, Greminger also commended the commitment of the Moldovan Government and parliament to pursue a robust reform agenda to tackle corruption and improve the independence of the judiciary. “The Organization’s institutions are fully prepared to support the implementation of these ambitious reforms, which will bring Moldova further towards fulfilling relevant OSCE commitments.” In this context, the Secretary General stressed that the transparent conduct of local elections on 20 October will be important for the further development of democracy and rule of law in Moldova, writes osce.org.

The Secretary General also welcomed the country’s efforts to promote the rights of national minorities and the development of the Gagauzia’s autonomy, which will create a favourable environment for the Transdniestrian settlement process.

To visit the left bank of the Dniester/Nistru River, the Secretary General travelled across the Gura Bicului-Bychok Bridge. The bridge was reopened in 2017 as part of the settlement process after being closed to traffic since the 1992 conflict. Recently, the OSCE Mission commissioned a technical assessment of the bridge, which will allow increasing the capacity of this important east-west transportation corridor that also links Moldova to Odesa, the primary trade point in the region.

During the visit, Greminger met representatives of the mediators and observers involved in the Transdniestrian Settlement Process, as well as members of the international community and civil society in the country and the staff of the OSCE Mission to Moldova.