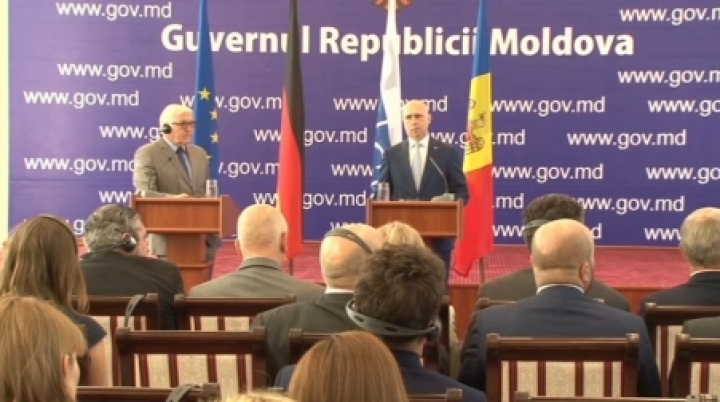 German Foreign minister Frank-Walter Steinmeier, the president-in-office of the Organization for Security and Cooperation in Europe, has had a meeting with Moldovan prime minister Pavel Filip.

Pavel Filip says he considers the German Foreign Minister’s visit as a gesture of solidarity and commitment on behalf of the head of the German diplomacy.

"Mr. Steinmeier’s visit is a special sign for our country. We consider it to be a gesture of solidarity and commitment to solve the Transnistrian conflict. We have exchanged views as to the 5+2 format talks. I have thanked the German leadership for enlivening the discussions at the Berlin reunion and the Bavaria conference. Progress is made and we could make even more progress.

We confirm we’ll observe the protocol from Berlin related to recognizing the education diplomas and car number plates, insuring the work of the Romanian-language schools, opening the bridge near Gura Bâcului and eliminating obstacles from the way of the free movement of people, goods and services.

We are willing to develop a concept regarding the special legal status for the Transnistrian area with the condition of observing Moldova’s integrity and sovereignty," said premier Pavel Filip.

Frank-Walter Steinmeier has specified he is happy with signing a joint protocol.

"I am in a double capacity in Moldova: as Germany’s Foreign minister and as OSCE president-in-office. It’s a difficult period: we have a lot of difficult and dangerous crises. I was recently in Armenia and Azerbaijan, where I discussed about the Nagorno-Karabakh conflict. I was also in Georgia, where I talked about the conflicts in Ossetia and Abkhazia. Now I am in Moldova to discuss about this social conflict. I see efforts have been lately made to resume the 5+2 format talks.

It’s a good thing that the Transnistrian conflict did not develop as the one from Nagorno-Karabakh. Recognizing diplomas and car number plates will lead to a success, I am sure. As an OSCE representative, we talk about common agreements and observing Moldova’s integrity and sovereignty. We can talk about a special status for Transnistria only under such conditions.

The Bavaria conference showed that the relations had well developed and we can contribute to soften this conflict. I am glad a joint protocol was signed. Many good things have been done and we’ll be able to make even more good things. We want to encourage Moldova to use the opportunities offered by the Association Agreement with the EU," said Frank-Walter Steinmeier.