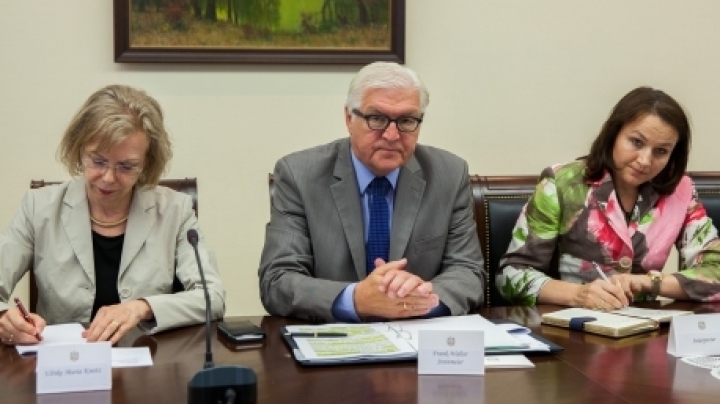 Moldova is encouraged to continue the small-step policy in regulating the Transnistrian conflict. The statement has been made by the OSCE chairman-in-office, Frank-Walter Steinmeier, at a news conference jointly held with Moldova’s prime minister Pavel Filip.

The European official believes a first step in bringing closer the Nistru’s banks could be internationally acknowledging the university diplomas and car number plates from the Transnistrian area.

"Moldova’s territorial integrity and sovereignty must be observed. Only under these conditions, one can discuss about a special status for the Transnistrian area. Let’s move from the tasks that can be accomplished to the tasks more difficult," Frank-Walter Steinmeier said.

The Chişinău authorities support the proposals of the German official.

"We have reiterated our interest in the 5+2 format talks for the political issues linked to drafting a legal status for the Transnistrian region as a component part of Moldova," premier Pavel Filip said.

The OSCE chairman has touched upon Moldova’s signing a new program with the IMF: "We’d be very glad, if such an agreement is reached.”

The German Foreign Minister has also met with Parliament President Andrian Candu, his Moldovan counterpart Andrei Galbur and with Reintegration deputy premier Gheorghe Balan. He is to make a trip to Tiraspol, too.