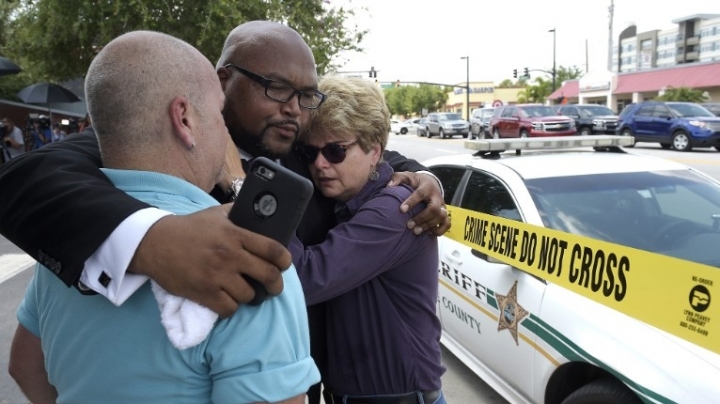 An American-born man who'd pledged allegiance to ISIS gunned down 50 people early Sunday at a gay nightclub in Orlando, the deadliest mass shooting in the United States and the nation's worst terror attack since 9/11, authorities said.

Omar Mateen, 29, carried an assault rifle and a pistol into the packed Pulse club about 2 a.m. Sunday and started shooting, killing 50 people and wounding at least 53, police said. After a standoff of about three hours, while people trapped inside the club desperately called and messaged friends and relatives, police crashed into the building with an armored vehicle and stun grenades and killed Mateen.

There has been no claim of responsibility for the attack on jihadi forums, but ISIS sympathizers have reacted by praising the attack on pro-Islamic State forums.

"We know enough to say this was an act of terror and act of hate," President Obama said in an address to the nation from the White House.

While the violence could have hit any American community, "This is an especially heartbreaking day for our friends who are lesbian, gay, bisexual or transgender," he said.

Mateen had worked since 2007 as a security officer at G4S Secure Solutions, one of the world's largest private security companies.

A message posted in Arabic on a dark web site associated with the ISIS news agency Amaq said "the armed attack that targeted a gay night club in the city of Orlando in the American state of Florida and that bore more than a 100 killed and wounded was carried out by an Islamic state fighter." But CNN's Salma Abdelaziz, who translated the message and closely monitors ISIS messaging, cautioned about taking the message at face value. She said the language is inconsistent with previous ISIS announcements and that the Arabic word for gay was used rather than an epithet normally used by ISIS. Also, there was no claim that the attack was directed, just an after-the-fact claim the gunman was an ISIS fighter, she said.

At a Sunday afternoon news briefing, FBI Assistant Special Agent Ronald Hopper said the agency was aware of Mateen. The FBI interviewed him in 2013 and 2014 after he expressed sympathy for a suicide bomber, Hopper said.

In the past two weeks Mateen legally purchased a Glock pistol and a long gun, ATF Assistant Special Agent in Charge Trevor Velinor told reporters. It's not known if those weapons were used in the attack.
More details can be found on the CNN website.
AFLĂ imediat Știrile Publika.MD. Intră pe Telegram