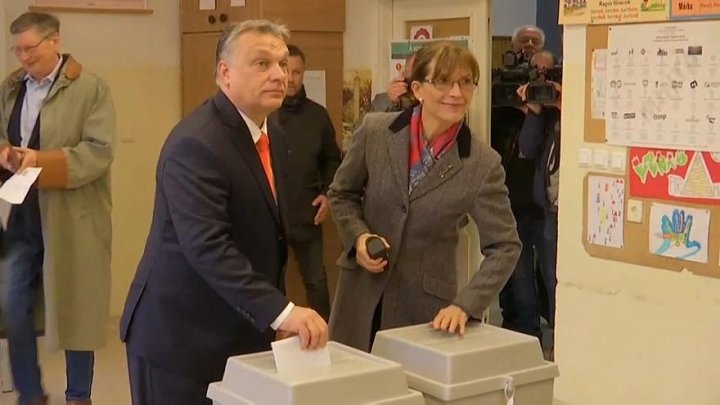 foto: Orban expected to win as millions of Hungarians head to the polls

Hungarians began voting on Sunday in parliamentary elections in which Prime Minister Viktor Orban was widely expected to win a third consecutive term in office.

It follows an often acrimonous campaign in which he portrayed himself and his Fidesz party as a savour of Hungary's Christian culture against Muslim migration.

"What's at stake, we've already said everything about that, it is the future of Hungary," he said after casting his vote.

"It's not only parties, a government, or a prime minister that we are choosing for ourselves, but a future as well. Voting is secret, but I'll reveal that I voted for Fidesz. I thought that was the safest bet."

Opinion polls show a strong lead for Fidesz, but there is a small chance that the fragmented opposition can deprive it of a majority.

The strongest opposition party is Jobbik, which campaigned on an anti-corruption agenda and for higher wages to lure Hungarians expatriates back home.

"Today will decide whether Hungary becomes an emigrant country or not," Jobbik's candidate for prime minister Gabor Vona, said.

"Emigration may or may not define Hungary, and I would prefer that it does not."

Turnout had already reached a record 13 per cent by 0900 local time (0700 GMT) on Sunday morning, the highest seen in Hungary's post-communist elections, and will continue until 1900.

Analysts say high voter participation would favour the opposition, especially Jobbik, and increase the chance of a hung parliament.

If Orban wins a majority, he is expected to carry on with economic policies including income tax cuts and incentives to boost growth.