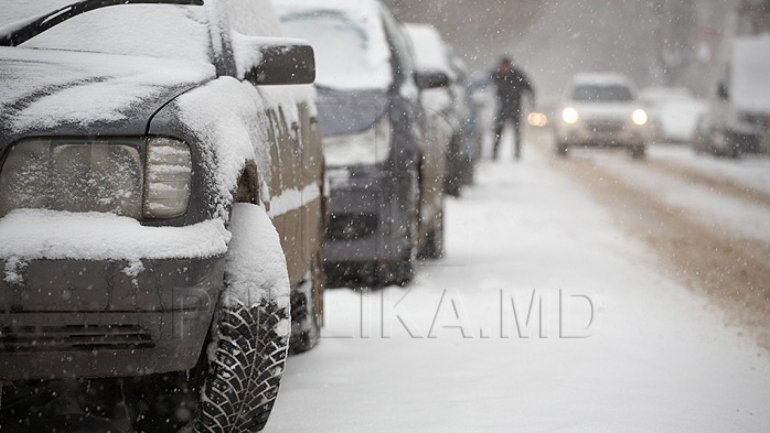 (UPDATE 16:12) The National Police recommends you to avoid Ion Ganea street from the Capital, as a tree fell on the lane. Almost 12 cars are currently stuck on this street.

There are no more highways or roads in the country were movement is suspended.

It has to be mentioned that due to bad weather condition, 65 car accidents took place on national roads, resulting in 11 injured persons.

National Police Inspectorate recommends driver to be more careful and respect the indications of patrol officers. Teams were dispatched and are ready to offer assistance.

The problems will be solved as soon as possible.

(UPDATE 09:25) Eight trucks are blocked on the country's roads, because of the abundant snow fall. According to the General Inspectorate for Emergency situations, a truck that was transporting cereals remained blocked near Moscovei village, Cahul district. Other seven trucks were stopped by the policemen in Giurgiulesti district. Because of the snow fall, 6 flights were late at the national airport.

(UPDATE 09:04) On Chisinau-Leuseni road, it is very hard to circulate at this hour. 17 trucks intervened to clean those roads and to spread the nonskid material. At Giurgiulesti customs, many trucks got blocked. The State Administrations' representatives works from last night to clean all the roads. 300 trucks and 300 workers spread nonskid substances. This morning, there were created three teams to operate in the crisis situations. Within those teams, there will be involved the representatives of Exceptional Situation Services.

If you became an eyewitness of a dangerous event, or you remained blocked in the road, , send us pictures on the email contact@publika.md, or through the option “STIREA TA”, from our website and they will be seen by the whole country.

Silvia Radu, the interim of the Capital mentioned that the responsible of roads are alerted and work 24 hours to avoid traffic jams. In Chisinau there are 45 trucks that clean the roads.

We mention that a truck transporting cereals remained blocked in Cahul, because of the abundant snow fall.

The warn of the abundant snow fall came into force last night. The wind's speed will be up to 70 kilometers per hour.

At 6 am, there was registered power cut in 55 regions of the country, 13 among which are districts. Thus, there will be power cut in Ialoveni, Criuleni, Orhei, Hâncești, Telenești, Ștefan Vodă, Anenii Noi, Cahul, Cantemir, Basarabeasca, Leova Ungheni and UTA Găgăuzia.