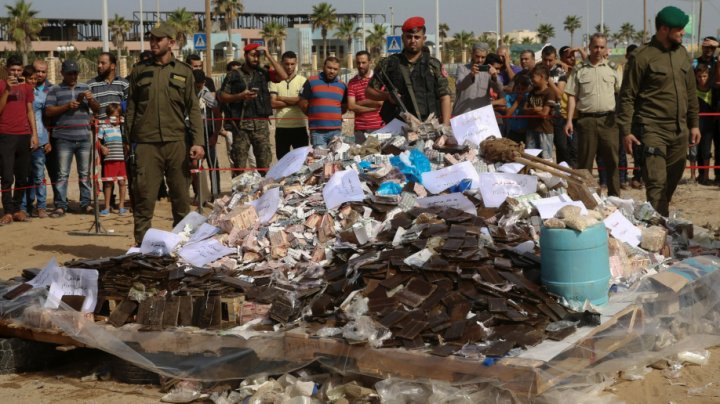 A nurse prepares a tranquilizer for a patient, the newest arrival to Al Amal Rehab Centre in Gaza.

The patient, a 29-year-old father of five, started taking pills five years ago, after a friend told him it would help him smoke without coughing.

He is one of the many victims of an opioid crisis which has quietly spread throughout Gaza.

And he's hoping treatment at this 15-bed facility will help him beat the addiction.

Rabie Ibrahim, a nurse at Al Amal Centre, has grown accustomed to witnessing withdrawal symptoms, such as anxiety, diarrhoea, sweating and vomiting.

"Many people say they tried to give up one, two and three times but failed because of the pain. The withdrawal symptoms make him want to resume taking drugs," he says.

He says the situation has led many to seek treatment in rehab centres.

"In some cases, the families noticed seizures among their children  and discovered later they are (drug) users," he adds.

There are no reliable estimates for the number of addicts in Gaza, a conservative society of 2 million where it is considered shameful to admit to such a problem.

A 2017 study by the World Health Organization estimated that 10,047 males over the age of 15 were "high-risk drug users."

The WHO study cited the blockade, high unemployment among university graduates and never-ending conflict with Israel as factors associated with "widespread" Tramadol abuse.

It said users turned to the drug to "escape problems," obtain a "feeling of relaxation," to "not think" and to fall asleep.

The scourge can be traced to the mass import of cheap opioid-based Tramadol pain pills through smuggling tunnels under Gaza's border with Egypt more than a decade ago.

A more addictive black-market form of the drug called Tramal has since taken hold.

The health ministry opened the first rehab centre to help painkiller abusers at Gaza's only psychiatric hospital in 2017 and has received 230 cases since then.

Patients live in the hospital for three weeks, where they are offered lower doses for withdrawal symptoms, consultation and psychological support.

Ninety percent of them have a Tramadol dependence.

Doctors say they need a national centre with more facilities to cope with demand for the service.

Injured during mass protests along the border between the Gaza Strip and Israel last spring, 29-year-old Mahmoud developed an addiction to painkillers.

Mahmoud took Tramal whenever he could, but also grew addicted to Lyrica, a potent painkiller used to narcotise nerves, particularly among patients who have undergone amputations.

Lyrica has become the main alternative drug that excessive Tramal users turn to.

"As an injured person, I resorted to getting help from the doctor because I want to stop. I want to take my medication in a controlled way," he says.

"It's expensive on the black market, so there was a possibility that he may show behavioural misconduct, theft or whatever to get money," he says.

"It's containment of the addiction and its social effects rather than treating it," Ashour says.

The health ministry, struggling to fight the spread, has curtailed the legal import of Tramadol, allocating specific days on a periodic basis for companies to bring it in.

In recent months, the problem has been compounded; prices have shot up as a result of tunnel closures and an anti-drug campaign by Hamas authorities.

A single Tramal pill has reached 75 Shekels (20 US dollars), way beyond most people's financial capabilities.

Colonel Ayman Batniji, a Hamas police spokesman, says the Palestinian police seized about half a million Tramadol pills and about 20 kilogrammes of hashish and other drugs in 2018.

"We noticed the drugs became scarce in the market and the users began looking for alternatives to the dangerous Tramadol that is distributed in the black market," he says.

Police data sheds more light on the spread of the drugs.

A synthetic opioid analgesic, it is considered a controlled substance by the US Food and Drug Administration, in the same category as well-known medications like Valium and Xanax.