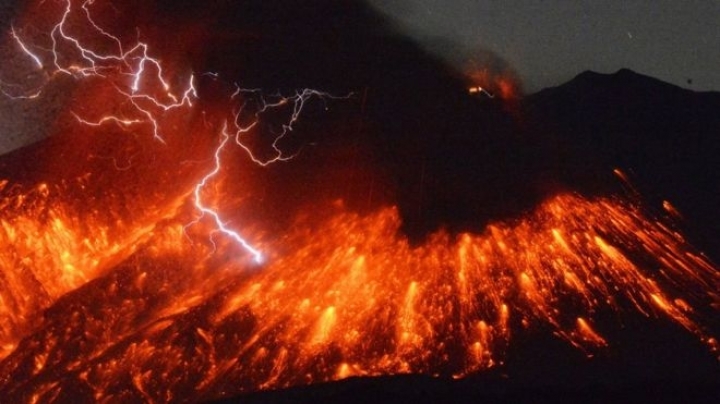 One of Japan's most active volcanoes is due for a major eruption within the next 30 years, say scientists who have studied a build-up of magma there, reports BBC.

The Sakurajima volcano on Japan's Kyushu island poses a "growing threat", researchers at the University of Bristol say.

The volcano, located 49 km from the Sendai nuclear plant, is also close to Kagoshima, a city of 600,000.

Sakurajima's last deadly eruption was in 1914, when 58 people died.

The Japanese archipelago, which sits on the Pacific "Ring of fire", has more than 100 volcanoes. Sakurajima regularly spews ash and there are many small explosions there each year, with the latest eruption being in February.

It is closely monitored by Japanese authorities and one of two volcanoes at Level 3 out of 5 levels in Japan's volcanic warning system, which means that people are warned not to to approach the volcano.

"The 1914 eruption measured about 1.5 km cubed in volume," said the study's lead author Dr James Hickey, who has now joined the University of Exeter's Camborne School of Mines. "From our data we think it would take around 130 years for the volcano to store the same amount of magma for another eruption of a similar size - meaning we are around 25 years away."

A report on the activity of the volcano was published on Tuesday and teams from Bristol University and the Sakurajima Volcano Research Centre took part.

Their research showed that 14 million cubic metres of magma is accumulating each year, enough to fill London's Wembley Stadium 3.5 times over.

They added that the rate at which the magma is accumulating is faster than it can be expelled in its regular smaller eruptions, which led them to infer that a major eruption is likely in the next 30 years.

They made these assessments based on new ways of studying and modelling the volcano's magma reservoir. Scientists say they hope these findings can help authorities plan for major eruptions.

"We know that being forewarned means we are forearmed and providing essential information for local authorities can potentially help save lives if an eruption was imminent," said Dr Hickey.

According to an associate professor at Kyoto University, new evacuation plans have already been prepared.

"It is already passed by 100 years since the 1914 eruption, less than 30 years is left until a next expected big eruption," said Dr Haruhisa Nakamichi, Associate Professor at the Disaster Prevention Research Institute, Kyoto University.