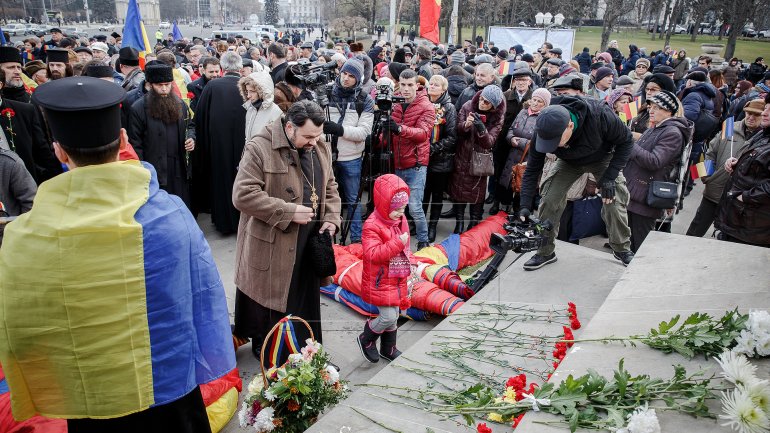 A huge flag with a length of one kilometer was laid today in Chisinau downtown. It was laid on Stefan cel Mare avenue from Sfatul Tarii street to Mihai Eminescu street. Hundreds of people have marked this way Romania's National Day.

The huge flag has a length of one kilometer was brought from Romania and was sewn for a period of two months.

People say that today is full of emotions and gives them hope that the union will occur soon.

Subsequently, the giant flag will be cut into pieces of ten meters each and will be given to schools and high schools in the country. The event was organized by the Association "Honor, Dignity and Homeland". The authorities also sent today a congratulatory message to Romania.

"Happy Birthday, Romania. I thank our friends from Bucharest for support and friendship. We must assure them that Moldova will be further consequent to the objective of European integration" said Moldovan prime minister Pavel Filip.

And the president Nicolae Timofti wrote a letter to his counterpart Johannis. The president said that in recent years the relations between Moldova and Romania have seen a rapid development in the spirit of well established privileged partnership. The community of values, language and culture, millennialy fortified and the unconditional support of Moldova's European integration will further be a solid foundation for strengthening and diversification, on multiple levels, of ties between both countries.