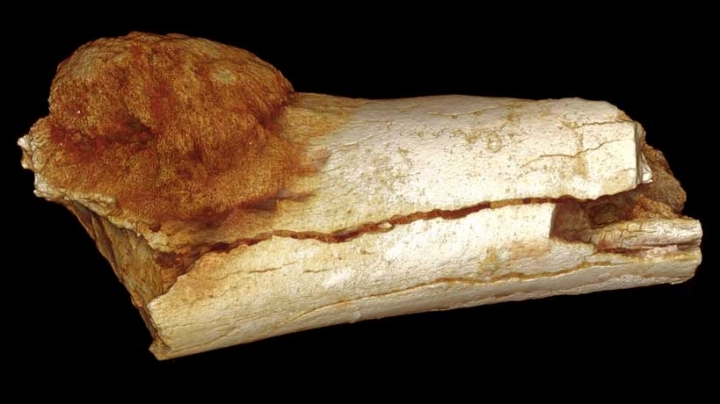 Cancer goes way, way back. A deadly form of this disease and a noncancerous but still serious tumor afflicted members of the human evolutionary family nearly 2 million years ago, two new investigations of fossils suggest.

If those conclusions hold up, cancers are not just products of modern societies, as some researchers have proposed. “Our studies show that cancers and tumors occurred in our ancient relatives millions of years before modern industrial societies existed,” says medical anthropologist Edward Odes of the University of the Witwatersrand in Johannesburg, a coauthor of both new studies. Today, however, pesticides, longer life spans and other features of the industrialized world may increase rates of cancers and tumors.

Until now, the oldest proposed cancer in hominids consisted of an unusual growth on an African Homo erectus jaw fragment dating to roughly 1.5 million years ago. Critics, though, regard that growth as the result of a fractured jaw, not cancer.

Although not life-threatening, this tumor would have interfered with walking, running and climbing, the researchers say. People today, especially children, rarely develop such tumors in spinal bones.

“This is the first evidence of such a disease in a young individual in the fossil record,” Randolph-Quinney says.
X-ray technology allowed scientists to create and analyze 3-D copies of the inside and outside of the toe and spine fossils.
But studies of fossil bones alone, even with sophisticated imaging technology, provide “a very small window” for detecting cancers and tumors, cautions paleoanthropologist Janet Monge of the University of Pennsylvania Museum of Archaeology and Anthropology in Philadelphia. Microscopic analysis of soft-tissue cells, which are typically absent on fossils, confirms cancer diagnoses in people today, she says.

Without additional evidence of bone changes in and around the proposed cancer and tumor, Monge won’t draw any conclusions about what caused those growths.

Monge led a team that found a tumor on a 120,000- to 130,000-year-old Neandertal rib bone from Eastern Europe. Whether the tumor was cancerous or caused serious health problems can’t be determined, the scientists concluded in 2013 in PLOS ONE, reports Sciencenew.org .