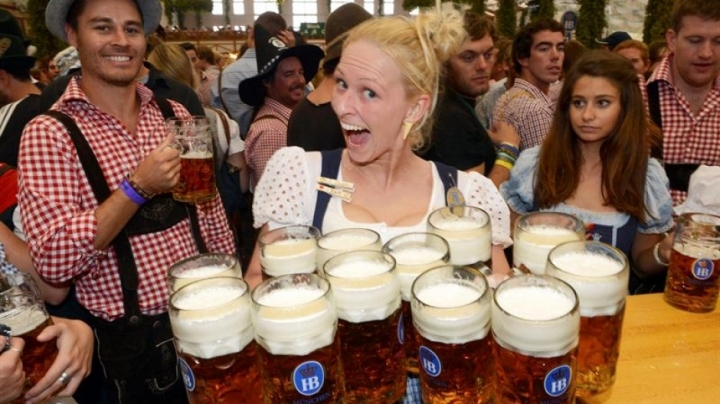 Despite its lowest turnout in 15 years, the number of sex crimes reported at this year's Oktoberfest has surged, reports Daily Mail.

The world's most famous beer festival saw numbers slump to their worst since the September 11 attacks in 2001 amid heightened security due to recent acts of terror.

About 5.5million people were in Munich for the 2016 Oktoberfest - which ended on Monday - down 300,000 from the previous year, but the number of sexual crimes reported to police shot up by almost 50 percent.

The overall amount of crime was down 15 percent on last year, but there were 31 reports of sexual crimes compared to 21 in 2015.

Organisers of the festival - also known as Wiesn - said this was down to the authorities having a greater awareness, according to The Local.

Support group Safer Wiesn for Girls and Women said it counted 215 women visiting the security checkpoint for help and that 18 of them had experienced violence.

Crimes such as pickpocketing and the number of people being clubbed with the over-sized beer jugs were down.

For the first time in the festival's 200-year history there were entrance checks to get into the ground as part of the heightened security measures.

It is thought to be in reaction to the terror attacks in Germany this year.

A shooting spree at a shopping centre in the Bavarian capital left nine people dead in July.

And in the same week a teenager in Wurzburg injured train passengers on an axe rampage and another man blew himself up outside a music festival in Ansbach.

In cities across Germany, women were molested by marauding gangs of men as they celebrated New Years Eve.

Oktoberfest is no stranger to terrorism.

Munich was the site of one of the worst terrorist attacks in German post-war history when a right-wing extremist set off a bomb that killed him and 11 others in 1980.