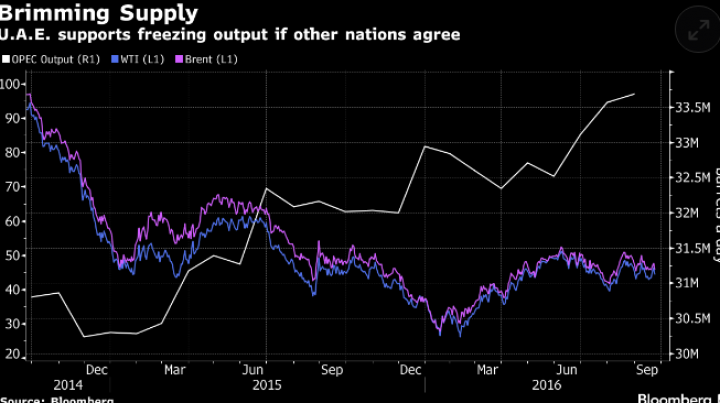 Oil extended declines as Iran said it’s unwilling to freeze output at current levels and wants to raise production to 4 million barrels a day, damping expectations for OPEC to reach a deal to stabilize markets when the group meets Wednesday in Algiers.

Futures fell as much as 2.1 percent in New York continuing the gyrations of the previous two days. It’s “not on our agenda” to reach agreement at the OPEC talks in Algiers, Iranian Oil Minister Bijan Namdar Zanganeh told reporters in the Algerian capital.

Influential forecasters gave a worsening outlook for the market, with the head of the International Energy Agency saying supply and demand won’t be in balance until late 2017 and Goldman Sachs Group Inc. cutting its fourth quarter price forecast.

Oil has fluctuated since rallying in August on speculation major producers will agree on ways to stabilize the market when they meet Wednesday. While Saudi Arabia offered last week to pump less crude if Iran caps output, neither the Gulf kingdom nor its neighbor expect an agreement this week. Freezing output was first proposed in February, but a meeting in April ended with no final accord.