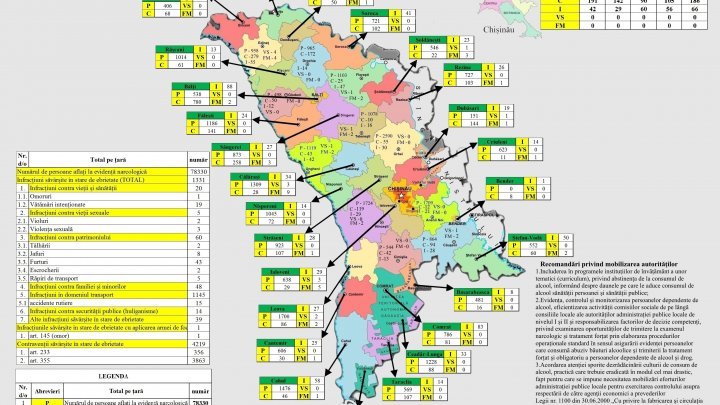 Drinking alcohol is a disease that often leads to serious consequences such as social and family isolation or committing serious offenses.

The General Directorate of Public Security of the General Police Inspectorate presents the Alcohol Consumption Map for the first six months of 2018, which includes data on offenses committed by drunkenness, segregated by districts and municipalities.

Accordingly, in the first half year, 1331 offenses were committed under drunkenness, 16.5% less than in the first six months of 2017. 86% of these offenses are committed in transports where drunk drivers are registered.

Although alcohol-related offenses are slightly down, compared with the same period of the previous year, there is a certain increase in conflicts that have resulted in killing or serious bodily injury. In Chisinau, the figure reaches 714 crimes.

The map was developed to inform the community, civil society and competent public authorities about the consequences of alcohol use in order to take action and take concrete action to prevent and combat this scourge.