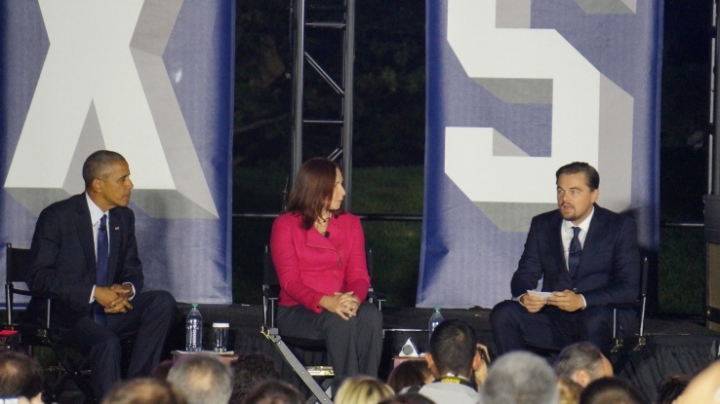 At an SXSL panel on Monday, President Obama, actor, environmentalist and philanthropist Leonardo DiCaprio and scientist Katharine Hayhoe discussed climate change and what we can possibly due to curb it, Techcrunch informs.

Hayhoe, who is the director of the Climate Science Center at Texas Tech University, and CEO of ATMOS Research & Consulting, helps organizations like airports and public water utilities assess the potential impacts of climate change on their infrastructure and plan accordingly. Following the discussion, DiCaprio premiered his new documentary about climate change, Before the Flood, at the festival hosted on the White House lawn.

Besides his acting career, DiCaprio has long been an advocate and philanthropic donor to environmental causes, but of late, has also invested in for-profit, for-good cleantech ventures, including Rubicon Global, an on-demand waste management company; Diamond Foundry, makers of cultured diamonds; and Zuli.io, makers of a smart power outlet.

The actor then asked the president to grade the global response to climate change so far. Obama said he was hopeful because India was expected to soon sign the Paris Agreement, but he urged greater action to combat carbon emissions. This week, he said, the United States would be negotiating with aviation companies to control their greenhouse gas emissions.

“We’re seeing climate changes at the more pessimistic end of the range that [was] anticipated by scientists. So we’re really in a race against time,” President Obama said.

DiCaprio then asked Hayhoe what are the most urgent threats to our modern-day civilization, and where the solutions lie.

The president and Hayhoe both discussed the breakthroughs that have already come about in solar and wind technology, and even more disputed energy sources like nuclear power and natural gas from fracking.