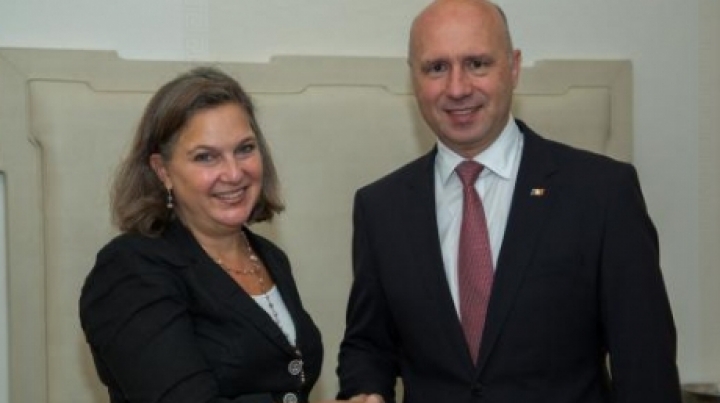 Strengthening the Moldovan-US Strategic Dialogue was the main topic of discussion at a meeting with Prime Minister Pavel Filip and US Deputy Secretary of State, Victoria Nuland. The meeting took place in the context of participation of the Moldovan delegation at the High Level Segment of the UN General Assembly.

Pavel Filip thanked the US part for the constant support given to Moldova on its European course, but also for financial assistance in the implementation of various projects.

Head of the Cabinet of Ministers informed the US official about the social and political situation in Moldova. Thus, over 90-per-cent of the provisions of the Roadmap on the reform agenda were made, a staff level agreement with the IMF was negociated and in October will be signed with the IMF.

Pavel Filip spoke about the reforms promoted by the government, in particular, public administration reform, the Government, administrative-territorial and pension system.

"Until now the political class was afraid to promote these reforms in order to not lose voters. My priority is not political career, so I will do everything possible to achieve these important reforms to modernize the country" , said the prime minister.

In turn, Deputy Secretary of State, Victoria Nuland, said she appreciates the work of the Government.

"I congratulate the Moldovan government for the results. You showed courage. Go forward and you will have our fullest support in carrying out reforms" , said Victoria Nuland.

The US official urged the government not to miss the opportunity offered by the IMF and the European Commission to carry out all arrangements negotiated. Pavel Filip assured that all IMF conditions will be met on time.

The parties discussed also about the regional situation and developments in the settlement of the conflict.

Prime Minister Pavel Filip constantly reiterated the importance of US support in the country's peace and stability.

In turn, Deputy Secretary of State Victoria Nuland reiterated his country's willingness to further back Moldova's territorial integrity and peaceful resolution of the Transnistrian conflict.