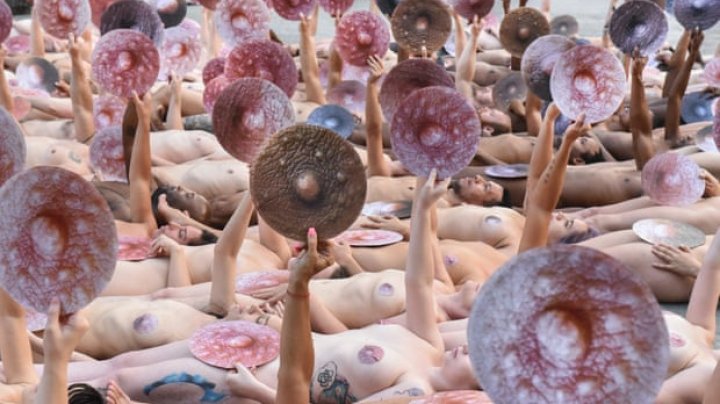 Some were hairy. Some were pointy. Some were dark brown, some a pale pink. But the hundreds of nipples on display in front of Facebook’s New York City headquarters on Sunday were technically 'male', despite some being on female protesters, reports The Guardian.

More than 100 people lay nude on the sidewalk to call for a change to the company’s censorship policies. The action, called #wethenipple, was organized by the artist Spencer Tunick and the National Coalition Against Censorship.

The demonstrators covered their bodies with stickers of male nipples to protest against Facebook and Instagram’s ban on 'some photos of female nipples' on the platforms. The activists say the ban harms artists and users exploring gender and identity.

Tunick, known for his nude photography, has been battling these policies for years, after Facebook disabled his page in 2014. He has organized similar interventions in the past, including an action in 2007 in which a collection of volunteers stood nude on a glacier in the Alps as part of a campaign on global warming.

'The work I’m allowed to post is fundamentally different from the work I make', he said. 'To me, every pixelated nipple only succeeds in sexualizing the censored work. As a 21st-century artist, I rely on Instagram. It’s the world’s magazine and to be censored on it breaks my spirit'.

The nipple images held by protesters were taken from 'donated' photographs of male celebrities and artists including Bravo’s Andy Cohen, the artist Andres Serrano, the actor-photographer Adam Goldberg, the Red Hot Chili Peppers drummer Chad Smith and Tunick himself.

The National Coalition Against Censorship sent Facebook a letter outlining its demands, signed by more than 250 activist groups and museums including the Electronic Frontier Foundation, the Association of Academic Museums and Galleries, and the Leslie-Lohman Museum of Gay and Lesbian Art. They are calling on Facebook and Instagram to enact a policy similar to that of YouTube, which changed its rules over a decade ago to allow some artistic nudity.

'The nudity ban prevents many artists from sharing their work online', the NCAC said. 'It particularly harms artists whose work focuses on their own bodies, including queer and gender-nonconforming artists, and the bodies of those in their communities. Museums and galleries are constrained when even promoting exhibitions featuring nudes'.

Users have challenged Facebook and Instagram policies in the past, questioning how the company defines a 'female nipple' and photoshopping male nipples on to their nude photos. Facebook did not respond to request for comment. The company has modified its policies in recent years to allow some images, 'including those depicting acts of protest, women actively engaged in breastfeeding, and photos of post-mastectomy scarring'. As of the time of publishing, photos and videos of Sunday’s action remain on Instagram.