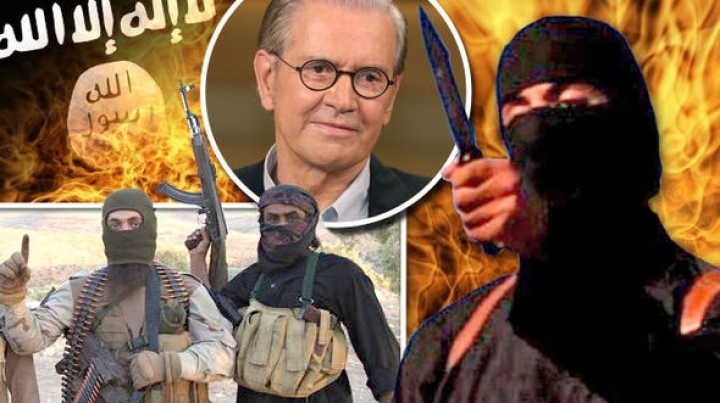 The claim comes from a veteran German journalist who is the only reporter to have been allowed to operate as an ‘embed’ with ISIS and escape alive, reports express.co.uk.

Jürgen Todenhöfer, 75, a former MP with Angela Merkel's CDU party, became a reporter in 2000 and has specialized in war reporting.

He spent 10 harrowing days on the ISIS frontline, dodging bullets and death threats, while being chauffeured around by none other than the UK’s own scumbag traitor 'Jihadi John' – real name Mohammed Emwazi.

Todenhöfer’s conclusions – detailed in a book called 'Inside IS - Ten Days In The Islamic State' - make chilling reading.

"The west is drastically underestimating the power of ISIS."

Shockingly, he even compares them to a "nuclear tsunami preparing the largest religious cleansing in history."

Critics say Todenhöfer, 75, was only allowed to get so close to ISIS because of his reputation as a vociferous critic of U.S. policy in Iraq and Afghanistan.

But he said: "This project was opposed by my family for seven months.

"My son ultimately accompanied me - against my will. He meant to protect me. And he filmed there."

He managed to make contact with his family only once, from an Internet cafe on the third day following their arrival, but their mobile phones were taken from them by their hosts.

He said” "My family didn't hear from us for seven days. It was very difficult for my daughters."

Todenhöfer added the trip came about after intense negotiations with "the leadership of the Caliphate, via Skype, over several months, hammering out the security details."

He made his will before leaving and said: "Of course I'd seen the terrible, brutal beheading videos and it was of course after seeing this in the last few months that caused me the greatest concern in my negotiations to ensure how I can avoid this. Anyway, I made my will before I left.

"People there live in shellholes, in barracks, in bombed-out houses. I slept on the floor, if I was lucky on a plastic mattress. I had a suitcase and a backpack, a sleeping bag.

"My impressions? That they are much stronger than we here believe.

“They now control land greater in size than the United Kingdom and are supported by an almost ecstatic enthusiasm the like of which I've never encountered before in a war zone.

“Every day hundreds of willing fighters from all over the world come.

"The beheadings have been established as a strategy which they wanted to spread fear and terror among their enemies. This worked well - look at the capture of Mosul taken with less than 400 fighters!

"They are the most brutal and most dangerous enemy I have ever seen in my life.

"I don't see anyone who has a real chance to stop them. Only Arabs can stop IS. I came back very pessimistic."