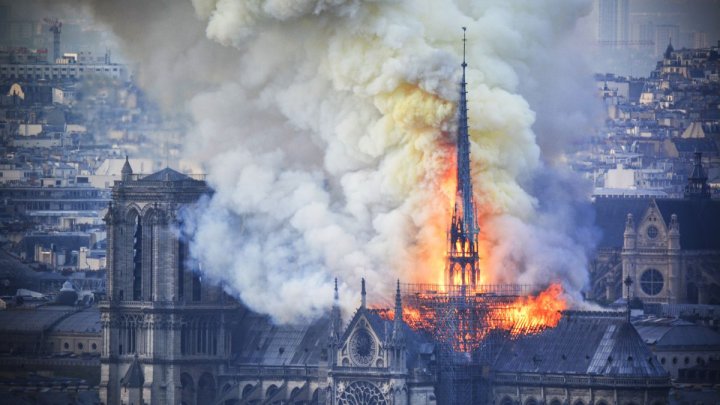 The spine-tingling, soul-lifting spire and roof of Notre Dame Cathedral were reduced to ash Monday, as a catastrophic fire spread through a building that has embodied the heart of Paris for more than 800 years.

The fire, which came during Christianity’s holiest week and was apparently accidental, left a smoldering stone shell where there had once been a peerless work of architecture, engineering and craftsmanship, writes The Washington Post.

Cathedral spokesman Andre Finot told reporters that the building had sustained “colossal damage” and that the medieval wooden interior — a marvel that has inspired awe and wonder for the millions who have visited over the centuries — had been gutted.

“Nothing will remain from the frame,” he said.

At one point Monday night, fire officials said the blaze might continue to rage uncontrollably and that the entire structure could collapse.

But late Monday, after hundreds of firefighters spent hours dousing the building with jets of water, Paris fire commander Jean-Claude Gallet said the iconic twin bell towers that stand astride the building’s grand entry had been saved.

Nearly nine hours after it began, Gabriel Plus, a department spokesman, said the fire was “completely under control,” the French newspaper Le Monde reported. Only residual fires remained, he said.

In an address to the nation just before midnight, President Emmanuel Macron said the worst had been avoided, that the exterior structure had been preserved and that the cathedral would rise again.

“I tell you solemnly tonight: We will rebuild this cathedral,” he vowed.

“Notre Dame of Paris is our history,” Macron continued, emphasizing the structure’s unique place in the national imagination. “The epicenter of our lives. It’s the many books, the paintings, those that belong to all French men and French women, even those who’ve never come.”

The cathedral had been undergoing a badly needed renovation after decades of deterioration due to pollution, acid rain and the ravages of time. Officials said they were considering the blaze an accident relating to the construction. The Paris prosecutor’s office opened an investigation.

There were no deaths, but a firefighter was reportedly badly injured.

The fire began in the early evening, just minutes after the building closed to tourists.

Yellow clouds of smoke billowed into an otherwise perfect blue sky and orange flames assaulted the belfry. At twilight, a gaping hole could be seen where the enormous vaulted roof once had been. Flames continued to lick the night sky as an impromptu chorus in the streets below somberly sang “Ave Maria,” some members falling to their knees.

The heat of the fire could be felt from across the River Seine as firefighters frantically pumped water from cranes and sought to save the priceless works stored and displayed within.

Initial reports in the French press suggested that many of those pieces had already been removed last week during the renovations, and Finot said that the cathedral’s collection of sacred items, kept in the sacristy, were likely unharmed. “Normally there is no risk of things being burned,” he said.

Officials later confirmed that two of the cathedral’s most precious relics survived the flames: a tunic worn by Saint Louis, a 13th-century French king, and the crown of thorns that Jesus is said to have worn.

The rest of the city seemed to stand still as the fire raged, with thousands of passersby watching from the streets below. Many were in tears, looking on in stunned silence. Some filmed the scenes on smartphones and broadcast them across the globe.

Worldwide, the destruction triggered an outpouring of emotion, with people posting family photos to social media showcasing visits to a building that was constructed and refined over centuries but burned within hours.

The building, the cornerstone of which was laid in 1163, is the most visited monument in Paris, with more than 12 million people coming each year — nearly double the people who visit the Eiffel Tower. Its intricate stone gargoyles, spires, stained glass and flying buttresses have made it one of the great masterpieces of architecture.

The church is both a literal and figurative center of the city: It anchors the Ile de la Cite, the island in the Seine where the first settlements emerged that eventually became the city of Paris. The common distinctions of “Left Bank” and “Right Bank” are in reference to this island.

Until Monday night, Notre Dame had managed to withstand both the elements and the vicissitudes of history that left their mark elsewhere in the French capital: the French Revolution, the Paris Commune, two world wars and Adolf Hitler’s demolition plans in 1944.

Pope Francis issued a statement late on Monday expressing the Vatican’s “shock and sadness” at “the news of the terrible fire that devastated the Cathedral of Notre Dame, a symbol of Christianity in France and in the world.”

“We express closeness to the French Catholics and the people of Paris and we assure our prayers for the firemen and those who are doing everything possible to face this dramatic situation,” the statement read.

“I do not have a strong enough word to express the pain that I feel,” tweeted Paris Mayor Anne Hidalgo.

Later, after visiting the cathedral’s interior late Monday, the mayor told reporters that the damage had not been as bad as she initially feared.

Many of those gathered at the base of the cathedral Monday were tourists and pilgrims visiting for Easter holidays. Others were local, there to pay their respects.

“I came because we live in Paris and because, well, last week we were all there, having a drink on the steps of the cathedral, enjoying the beautiful flowers in the garden,” said Fatima Marie, a 35-year-old Parisian. “We thought it would be better to be here among friends.”

Throughout French cultural history, Notre Dame has served as a powerful symbol of Paris and of France’s cultural heritage. The writer Anatole France once described it as “heavy as a hippopotamus” but “light as a butterfly.” The painter Marc Chagall depicted it in his canvasses, distorted in dreamlike haze.

Although there was no evidence of a connection, France has seen a number of attacks on Catholic churches in the past year, including arson and vandalism.

Paris’s Church of St. Sulpice was set on fire after midday Mass last month. No one was injured. Police are investigating, but firefighters attributed the blaze to arson.

The possibility that foul play had been the cause of the Notre Dame fire was on the minds of some of those who watched Monday evening as the cathedral burned. The fall of the central spire — toppling amid an inferno — added resonance to the comparison to another tragic blue-sky day nearly 18 years ago.

“I was in New York on 9/11 and this reminds me of that,” said Donna Calhoun, 57, a professor of mathematics from Boise who is on sabbatical at the Sorbonne.

The expressions of solidarity, too, were similar to the ones voiced in September 2001, even if this time there were no deaths and apparently no malicious intent.

“Notre Dame of Paris is Notre Dame of all of Europe,” tweeted European Council President Donald Tusk. “We are all with Paris today.”