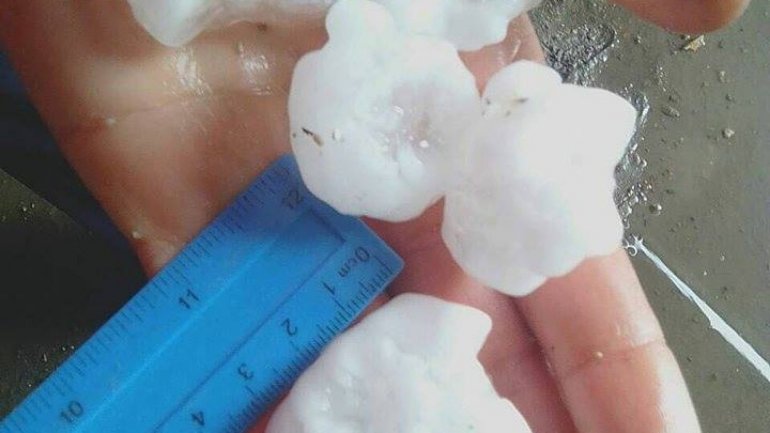 Dozens of houses and hundreds hectares of orchards were destroyed, as a result of last evening's hail in Cunicea village, Florești district.

Villagers were devastated, as they woke up to all their harvests completely destroyed.

Representatives from Civil protection and Emergency Situations Service will soon establish the damages.

The hail tore apart 50 houses from Cunicea. People say that it came unexpected and lasted a short period of time, yet managed to do grave damage. Some were left without a roof right when winter is nearby.

"The ice was bigger than this rock. It was frightening. I will also have to repair most of the roof."

Some even lost their cars. Those parked outside were heavily dented because of the big chunks of ice. A man now has to repair two cars, the roof of his house, as well as replace the glass from the door and windows.

"You can see the big pieces of ice that have yet to melt."

Now that the roofs are filled with holes, people have rain in their own houses.

"My husband and me couldn't sleep properly. We had to stay awake all night to catch the rain water. This part of the house was the most damaged."

The hail managed to destroy over a hundred hectares of orchards from around the village. Simion Danțov has lost most of his apple trees from the  50 hectares he owns. He claims that now those fruits will be useless, not even juice could be made out of them. Simion Danțov declared that despite it lasting only around ten minutes, the damages were of million and he lack an insurance.

"Now the ice has melted a bit. Can you imagine how big the chunks initially were?"

"There is no doubt that this year we will have a small harvest. More than that the hail most likely damaged next year's harvest, maybe even that of the next two years."

Vitalie Moraru had 5 hectares of strawberry, but now there nothing left.

"I bought the seeds for 4 lei 50 bani per package and had 40 thousand seeds in total. Together with the maintaining system it gathers a big amount of money."

The nearby village, Ciripcău had an anti-hail system installed on 60% of its plains.

"We have to go to the field to see what survived. For now we know that a hundred hectares of orchards were destroyed, along with 21 hectares of sunflowers."

Authorities from Florești district admitted that they don't have enough money to reimburse the damages.  Cunicia village budget is of 14 thousand lei.

"I don't believe that the districts authorities will be able to repay all the damage, we will have to ask for money from the state budget in order to reimburse at least a bit the villagers" Deputy President of Florești, Gheorghe Gonciar declared.

Other regions from the North were also affected. In Olişcani village, from Şoldăneşti, the wind has managed to destroy the roofs of a middle school, a hospital and of a few houses. In Cobîlea it was reported that the element harmed 40 hectares of orchards and 21 hectares of soy.  In Chersac village, Teleneşti, the powerful wind has managed to tear off the roofs of a few houses.

Ukraine has not fared any better.

In Berdîciv, from Jîtomir the hail has managed to destroy a few houses and cars.