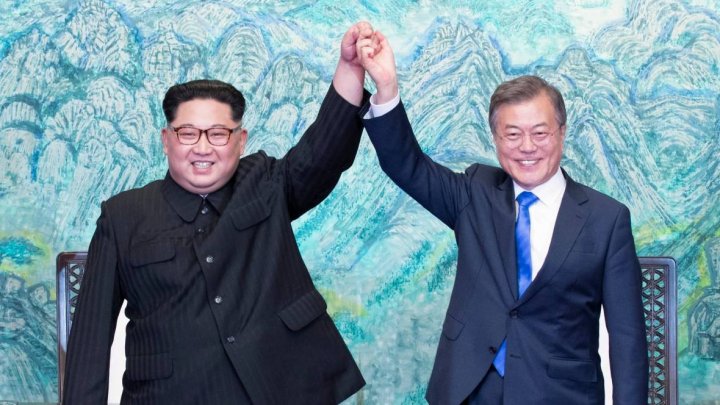 North Korea's nuclear test site will close in May, the South Korean president's office has said.

A spokesman said the closure of the Punggye-ri site would be done in public and foreign experts from South Korea and the US would be invited to watch.

Scientists have said the site may have partially collapsed in September.

Their summit came after months of warlike rhetoric from the North.

On Saturday, US President Donald Trump he would likely hold talks with the North Korean leadership "over the next three or four weeks" about the denuclearisation of the peninsula.

Presidential spokesman Yoon Young-chan said that Mr Kim had stated he "would carry out the closing of the nuclear test site in May".

Mr Yoon added that the North Korean leader had also said he "would soon invite experts of South Korea and the US to disclose the process to the international community with transparency".

The office also said North Korea would change its time zone - currently half an hour different - to match that of the South.

North Korea has so far made no public comments on the issue.

Situated in mountainous terrain in the north-east, it is thought to be the North's main nuclear facility.

The nuclear tests have taken place in a system of tunnels dug below Mount Mantap, near the Punggye-ri site.

Six nuclear tests have been carried out there since 2006.

After the last, in September 2017, a series of aftershocks hit the site, which seismologists believe collapsed part of the mountain's interior.

Mr Kim made an apparent reference to these reports, according to South Korea's Yonhap news agency.

"Some say that we are terminating facilities that are not functioning, but you will see that they are in good condition," the North Korean leader was quoted as saying by Mr Yoon on Sunday.

The information about the nuclear site has been gathered mainly from satellite imagery and tracking the movement of equipment at the location.