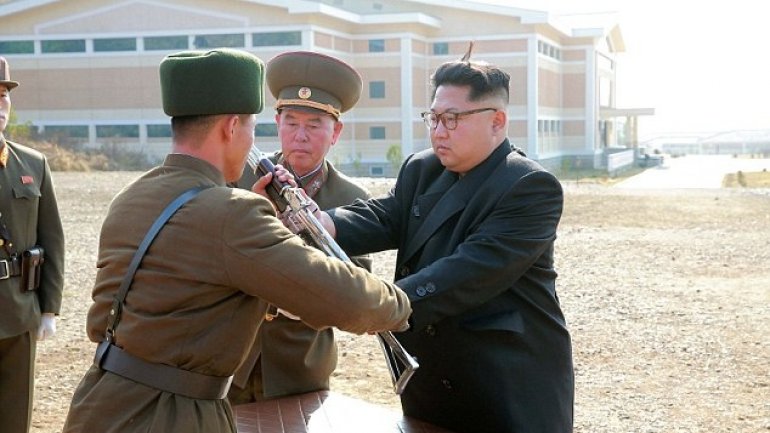 North Korea is set to launch a missile on the day of the US presidential election, it has been reported, according to Daily Mail.

US forces and the South Korean military have their troops in the Korean peninsula on high alert amid the threat of a missile test tomorrow.

Experts fear the secretive state will launch the Masudan or BM-35 rocket, both of which could hit targets in the US Pacific territory of Guam that is 1,800 miles away, Yonhap news agency reported.

The tropical island of Guam, in the western Pacific, has many American strategic assets to counter any attack from the North.

The North has continued carrying out missile and nuclear tests despite sanctions by the US and other countries.

An official from Seoul's Joint Chiefs of Staff said they are 'closely watching every move by the North Korean military at its Punggye-ri nuclear test site and other possible missile-launching sites'.

'The military is fully prepared to respond to any provocative acts by the North,' the official added.

A military spokesman added: 'All military and security matters, including the deployment of an advanced missile defense system known as Thaad, will be pushed forward as planned regardless of the scandal.'

South Korean foreign minister Yun Byung-se warned last month that the North is close to the 'final stage of nuclear weaponisation' and ally states would mobilise 'all tools in the toolkit' to protect themselves.

He ordered them to 'eliminate the human filth occupying the [South Korean] presidential Blue House, military and the puppet government, all who have committed crimes that cannot be forgiven for all of eternity.'

In September, North Korea conducted its most powerful nuclear test to date, marking the 68th anniversary of its founding.

The North said that test had been of a 'nuclear warhead that has been standardized to be able to be mounted on strategic ballistic rockets'.

South Korea's military said it was about 10 kilotonnes, enough to make it the North's 'strongest nuclear test ever'.