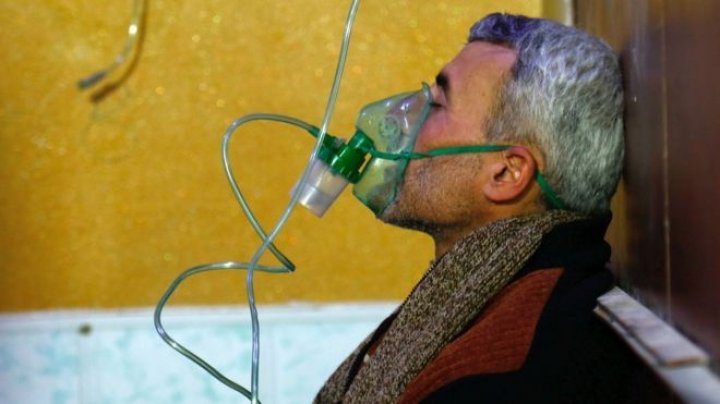 North Korea has been sending equipment to Syria that could be used to make chemical weapons, a UN report says.

Some 40 previously unreported shipments were made between 2012 and 2017, the report found. Materials included acid-resistant tiles, valves and pipes.

The report - yet to be released - said N Korean missile specialists had been seen at Syrian weapon-making centers.

The allegations follow new reports of chlorine being used by Syrian forces, which the government denies.

A second daily pause in fighting in the Eastern Ghouta region outside Damascus is due to begin, to allow in relief aid.

Aid was unable to enter the rebel-held region on Tuesday - the first of the five-hour "pauses" in fighting - after clashes continued.

According to the confidential report, seen by the BBC, North Korea sent illicit supplies to Syria which included high-heat, acid-resistant tiles, corrosion-resistant valves and thermometers. The tiles are said to be used to construct facilities where chemical weapons are produced.

The Scientific Studies and Research Center (SSRC) - a Syrian government agency - is alleged to have paid North Korea via a number of front companies.

UN spokesman Stéphane Dujarric did not say whether the leaked report would be published, but told the New York Times: "I think the overarching message is that all member states have a duty and responsibility to abide by the sanctions that are in place."

It said that two UN member states had intercepted shipments bound for Syria, and that the goods were suspected to be supplied by North Korea's main arms exporter as part of a contract with front companies representing the SSRC.

The Syrian government is reported to have told the UN panel that the only North Koreans present in Syria are sports coaches and athletes.

Syria signed up to the Chemical Weapons Convention and agreed to have its declared chemical weapons stock destroyed in 2013 after a Sarin nerve agent attack killed hundreds of people in rebel-held suburbs of Damascus..