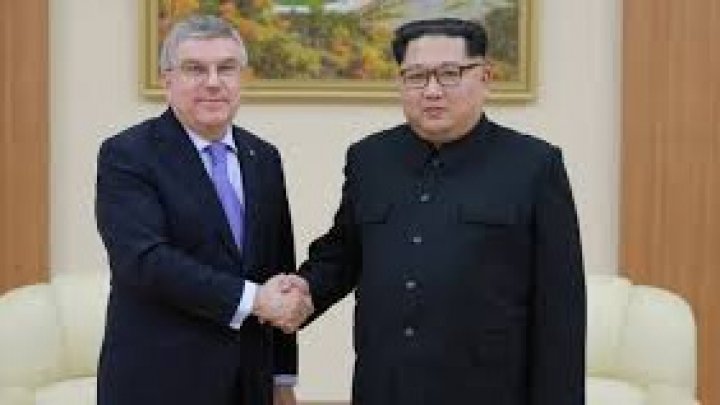 Bach traveled to Pyongyang on Thursday in a visit that comes after North Korea’s participation in the Pyeongchang Winter Games helped ease tensions over the Korean peninsula.

Speaking to reporters at Beijing airport upon his return, Bach said North Korea will participate in the 2020 Summer Games in Tokyo and the 2022 Winter Games in Beijing.

“This commitment was fully supported by the supreme leader of the DPRK in a very open and fruitful discussion I had with him yesterday,” Bach said, using the country’s formal name, the Democratic People’s Republic of Korea.

“The IOC will make a proposal for a potential joint march or potential other joint activities for Tokyo and then maybe also for Beijing at the appropriate time,” he added.

The North’s official Korean Central News Agency (KCNA) said Bach told Kim the trip was to “express the most heartfelt thanks” to North Korea’s leader for helping make February’s the Pyeongchang Winter Olympics a Games that were “symbolic of peace.”

Athletes from North and South Korea marched under a unified peninsula flag at the opening ceremony in Pyeongchang, and the two Koreas have seen a significant thaw in tensions since.

KCNA said Kim expressed thanks for the IOC’s support and for cooperating with North Korea “regardless of any political climate and conditions”.

He said he hoped that the IOC’s relationship with the North’s Olympic Committee would continue to develop favorably and expected cooperation in developing and improving sport in North Korea, the report added.

An official from South Korea’s Unification Ministry said it was aware of the KCNA’s report but declined to comment further.

Bach had accepted North Korea’s invitation in February, and told Reuters at the time that he saw sports as a way to reduce political tensions.

After Kim made a surprise trip this week to Beijing to meet with Chinese President Xi Jinping, his engagement with the international community has sparked speculation he may try to meet other leaders ahead of summits with South Korean President Moon Jae-in and United States President Donald Trump.

The two Koreas have experienced a significant easing in tensions since the Winter Olympics in South Korea in February, leading them to set a date to hold their first summit in more than a decade on April 27.