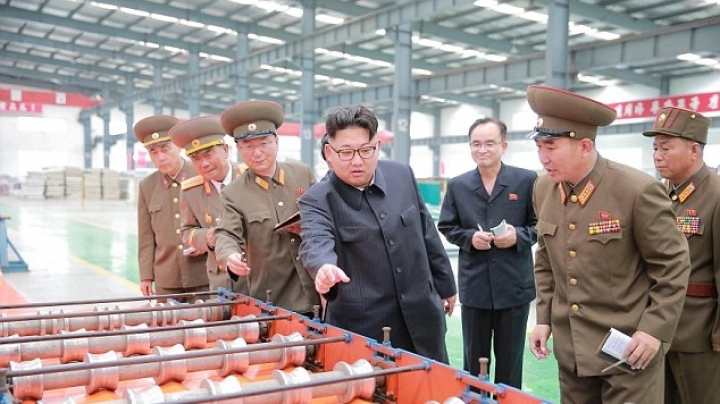 They were blamed for the defection of 13 workers at a North Korean-run restaurant in China, reports Daily Mail.

The group of 12 women and one man fled China's eastern port city of Ningbo and defected to South Korea in April.

Following that the families of the six officials were locked up and then had to watch their public executions on May 5.

It is claimed the workers had tired of Pyongyang's ideological campaigns and had become disillusioned with their home country after watching South Korean television dramas and films.

They were accepted into South Korea on humanitarian grounds.

North Korean watcher Choi Seong-yong, who is the chief of Abductees' Family Union, told the Yonhap news agency: "North Korean leader Kim Jong-un ordered six officials, including intelligence officials, to be executed publicly on May 5 due to their lack of control over overseas [North Korean] workers."

As many as 80 government authorities and more than 100 family members were forced to watch the public execution, it is claimed.

About 50,000 North Koreans, including some minors, have been sent to other countries to earn money for the world's most secretive state, working in mining, logging, textiles and construction.

It is reported that Pyongyang runs as many as 130 restaurants in Asian countries such as China and Vietnam generating up to $10m a year.

Most of the restaurant workers are generally handpicked from families that are 'loyal' to the regime and go through extensive ideological training before being sent out.

In the latest case, North Korean authorities claimed the South forced the workers to defect, blaming it on a 'hideous abduction', something Seoul vehemently denies.

North Korean despot Kim Jong Un has reportedly overseen a series of killings, purges and dismissals since he took power in late 2011, in an attempt to tighten his grip on power.

The rival Koreas have shared the world's most heavily fortified border since the end of the 1950-53 Korean War, and they bar ordinary citizens from exchanging phone calls, letters and emails without special permission.

About 30,000 people have fled North Korea and arrived in the South, including 1,276 last year, with numbers declining from a 2009 peak.

North Korean defectors to South Korea typically travel through China to a third country, such as Mongolia or Myanmar, before reaching the South.

The North punishes those who are caught trying to defect and their families, while China's policy is to return any fleeing North Koreans it catches in its territory.