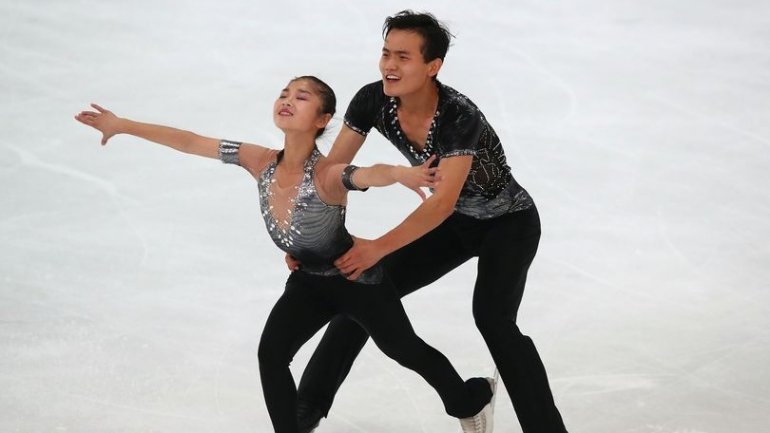 North Korea is planning to send two figure skaters to next month's Winter Olympics in South Korea amid rising tensions over its nuclear weapons program.

Kim Jong-un's regime has repeatedly threatened its neighbor with force, and has put the region on the brink of war thanks to its missile launches and nuclear tests.

But it now hopes to send two athletes to a global event that aims to build "a peaceful and better world" through sport.

The figure skaters - Ryom Tae-ok and Kim Ju-sik - qualified at event in Germany after skating to music by The Beatles.

He spoke to reporters at Beijing airport on Saturday before he reportedly boarded a plane to Switzerland, where the IOC is based.

Kim had previously offered to send a delegation to the Olympics in Pyeongchang in a New Year's speech in which he also called for reduced tensions but remained committed to the country's nuclear weapons programme.

Ryom Tae-ok and Kim Ju-sik are the only North Korean athletes who have qualified for the two-week event.

But North Korea's Olympic committee failed to enter them before an October deadline.

They could still participate, as North and South Korea have agreed to discuss the Olympics in rare talks at the border, starting on Tuesday.

The Pyongyang-based figure skaters qualified for the 2018 Games at a competition in Germany in September last year.

They skated to an instrumental version of The Beatles' "A Day in the Life" and the French song “Je suis qu‘une chanson”, earning one of five qualifying spots.

North Korea last participated in a Winter Olympics in 2010 in Vancouver, Canada, and has won just two medals - silver and bronze, both in speed skating - since it first participated at the 1964 Games in Innsbruck, Austria.

The country has had more success at the Summer Games, winning 54 medals over ten Olympics, including seven in Rio de Janeiro in 2016.