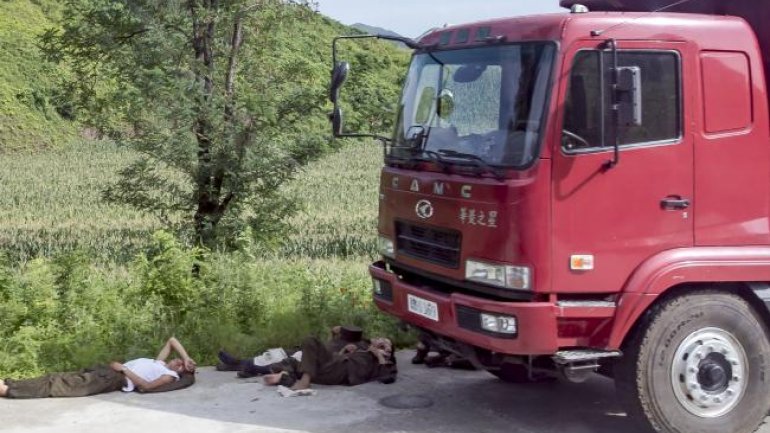 PICTURES smuggled out of North Korea by a tourist appear to reveal the true unprepared reality of Kim Jong-un’s army.

As the North Korean leader continues to ratchet up his rhetoric with US President Donald Trump amid heightened fears of a nuclear war on the Korean peninsula, these revealing snaps show a different side of the story.

The pictures, taken between Mount Kumgang and the city of Wonsan on North Korea’s east coast, show trucks that date back to World War II, dangerously overladen vehicles, female soldiers wearing high heels, fighters who appear to be carrying fake weapons and exhausted troops sleeping by the roadside.

The photographer, who asked not to be identified, said he saw soldiers unprepared for conflict throughout the country including at the border with South Korea.

North Korea is very protective about pictures taken by visitors and photos are often deleted or cameras taken when travelers depart the reclusive state.

However these pictures were saved on a camera with two memory cards, which meant deleted photos were backed up.

But the photographer said he didn’t have to worry about that because his guides were “very liberal” and never inspected his photos.

“I read a lot on the internet about the guides looking through your camera every day and even some times when you leave the country,’ he said.

“So I bought a camera with twin memory card bays, so even if I had to delete a picture I had one left ... but my guides were very liberal and never inspected my photos.”

But the appearance of the new images contrasts with the seriousness of a warning that has been issued about a possible new strategy Kim’s regime may be adopting.

North Korea is suspected of producing biological weapons to unleash against enemy troops and civilians — including by fake janitors lugging backpack sprayers containing deadly pathogens, according to a report.

“North Korea is likely to use biological weapons before or at the beginning of a conflict to disrupt society and create panic, incapacitate societies, and/or cause a significant military diversion,” according to the Belfer Center for Science and International Affairs at the Harvard Kennedy School.

The report added that the difficulty in verifying North Korea’s capabilities arises in part from the mixed use of the equipment and facilities in creating the weapons.

“While nuclear programs can be monitored by the number of nuclear tests and the success of missile tests, weaponizing and cultivating pathogens can stay invisible behind closed doors,” the authors said.